Fashion on the Ration exhibition

I made it there eventually, and it was worth it. I didn't want to go in the school holidays, but I knew if I didn't go now, I would never get there. The Victoria line is closing at my end over August, so I will be trapped in the Stow. 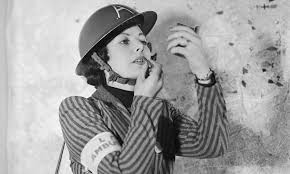 I took my boy with me, who was a little angel, and enjoyed the whole thing. 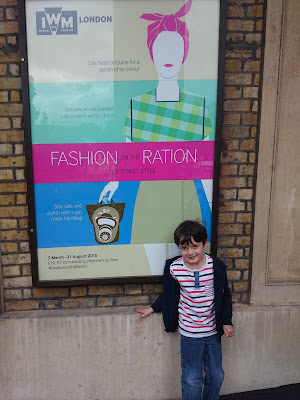 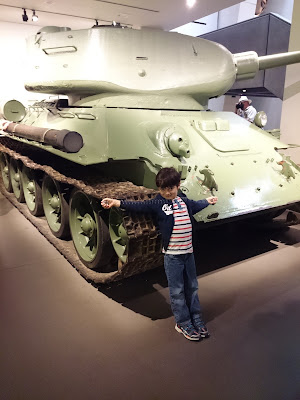 He loved seeing the Spitfire suspended from the ceiling, and a huge tank. 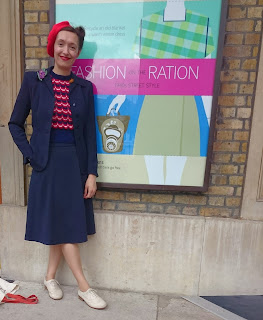 I wore my only piece of CC41 clothing - a tailored navy jacket, with what I think are the original buttons. It is a little snug now, but looks just as good unbuttoned, and to go with it I wore my Victory Jumper and Moss Stitch beret.  I am also wearing a couple of brooches, a bakelite flower in a yellow/gold shade, and one of my knitted brooch patterns - A Posy of Violets. This is partly because they are pretty, and partly to hide the moth holes. Still, it hasn't done badly considering it is over 70 years old.

The exhibition is broken into six sections: Into Uniform, Functional Fashion, Make Do and Mend, Utility Clothing, Beauty as Duty and Peace and a New Look.

The Make Do and Mend section was a real lesson in recycling.

'Everyone should understand that it is patriotic to wear old clothes. That does not mean of course that you have to look shabby. You always look neat if you keep your clothes clean and well repaired.' (From Can I Help You on the Home Service, 10th March 1942).

There was a patchwork dress and housecoat made from scraps of fabric, lingerie made from silk maps originally used by the RAF, and lots of ingenious ways of re-invigorating a tired wardrobe. The poster that helped promote this was 'Go Through Your Wardrobe', (one of which I had to purchase). 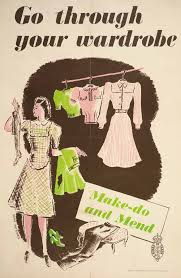 The Utility Clothing section, which was given the name CC41, has a large and comprehensive collection of clothing from that time. Everything from underwear to a red wool overcoat, with dresses in myriad colours and fabrics. 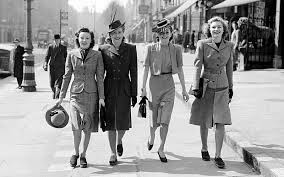 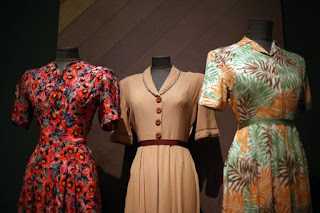 If I hadn't known it was utility clothing, I would never have thought anything other than how chic and beautiful it was.

Beauty as Duty was a fascinating look at the lengths women had to go to, to look half decent. As makeup became scarcer and scarcer, women became increasingly desperate, and turned to homemade preparations like beetroot water to stain their lips red! I have to say this particular propoganda does rankle me a little. While the men were off fighting, women were told they just had to try and look pretty. In fact, it was their 'duty' to. Lots of cosmetics companies pushed this idea in their advertisements:

On the knitting front, there was just one case, with some wools, patterns for knitted underwear, and some lovely fair isle knits, a matching beret and scarf.

I thoroughly enjoyed it, and the new look Imperial War Museum. I hadn't been since well before my boy was born, so it was great to see all the new galleries. The staff were on hand to give much needed expert knowledge on every exhibit in the museum. It was particularly helpful when my son asked where the bombs were put in the Spitfire, (I didn't know they sometimes carried them), and as I said this a chap jumped in and told him all about it. Marvellous.

On my knitting front, I am planning my holiday projects. We fly to the States on Monday for a week and having just had a phone call from the airline I was able to ask directly if I am allowed knitting needles and crochet hooks on board - and it was checked, and I am. Hooray!

You may have noticed I was working on a holiday piece, a crocheted beach T-shirt thingy from Inside Crochet magazine. 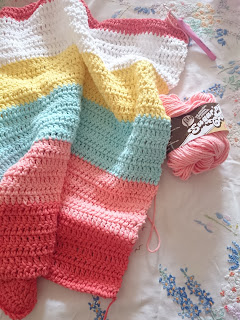 I went a bit crazy with my colour choices and it has turned into a bit of a beast. I have attached the front and back at the shoulders, so it looks a bit like a poncho at the moment, which would be fine if I were going to a Mexican fiesta. My husband said it would look great with a sombrero, and even better if I were holding a taco in each hand. Now I do intend to eat tacos on holiday, but perhaps not while wearing the 'Fiesta' poncho. Grrr. The original is so chic too. I might rip back the top which has closer spaced stripes and just continue with white. And do the sleeves in white. 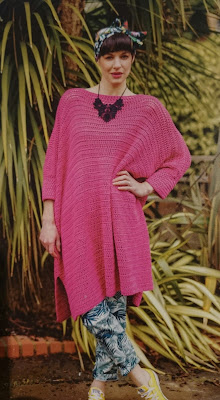 I will be taking my Stitchcraft jumper, from the cover of March 1941. 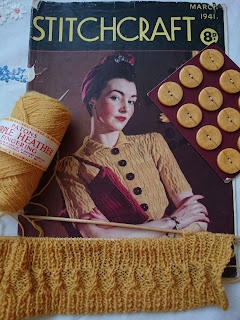 I am on the second front now (ooh, sounds a bit military), just the sleeves to go. Oh, and the front bands, and the belt, and the collar. Then the sewing up. Hmm. I want to take some crochet projects too, but need some time to decide on the right ones. I might also take some yarn for projects I plan to sell at the next E17 Designers Fair in October. Some brooches and a beret or two. I will mainly be selling the patterns, but I think it might be nice to have the knitted pieces available too, for the non-knitters. I can only try.

What are your plans for the summer?

Email ThisBlogThis!Share to TwitterShare to FacebookShare to Pinterest
Labels: Crochet, Inside Crochet, IWM, Make Do and Mend, Stitchcraft, vintage knitting