A free pattern for a 'Jumper in Thick Wool' from a 1936 edition of Home Notes. It uses a chunky weight yarn, which at first I thought was most unusual, until I had a flick through some other patterns from that era.

There was an explosion of knitting patterns released in the 1930s, and with it came a huge array of yarns to go with them. When one thinks about knitwear from the 1930s and 40s, it is 3 ply that springs to mind. That is not strictly the case though. I was reminded of this by a good knitting pal, Simone, who has a collection of vintage knitting patterns that I am in awe of (although, I may get a peek at them someday soon). Yarns named Kwiknit, Speedknit, and Zephyr, just in case you had any doubts as to their claims. Aran or worsted weight yarns were really quite popular, and chunky and super-chunky yarns were used predominantly for jackets to achieve that 1940's silhouette, like the Box Coat from A Stitch in Time vol 2.

This is the first time I have attempted a vintage jumper in this thickness, though. I dived in on a whim, but I am sorely lacking in chunky weight wool, being more of a 3 and 4 ply gal. I did manage to dig out four balls of - wait for it - Robin Chunky ACRYLIC. 100% acrylic. I was convinced it would turn out to be a beast of a thing, but I have to admit, it didn't behave at all badly. 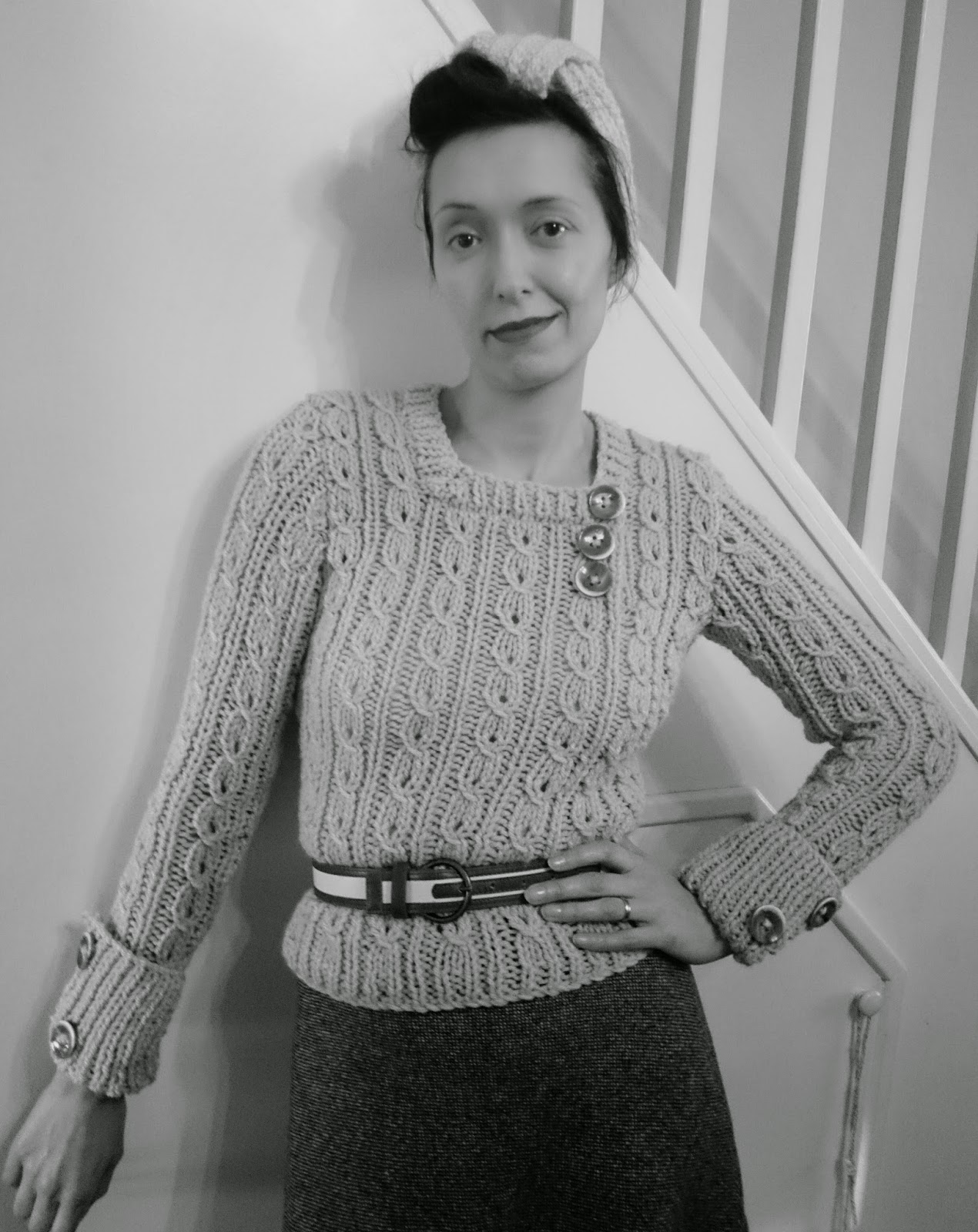 I went down a needle size to 7mm, to achieve the required tension, but now wish I hadn't, as it could have done with a tad more ease. It does not have the same fit as the original, but then again, I thought that looked a little too shapeless. 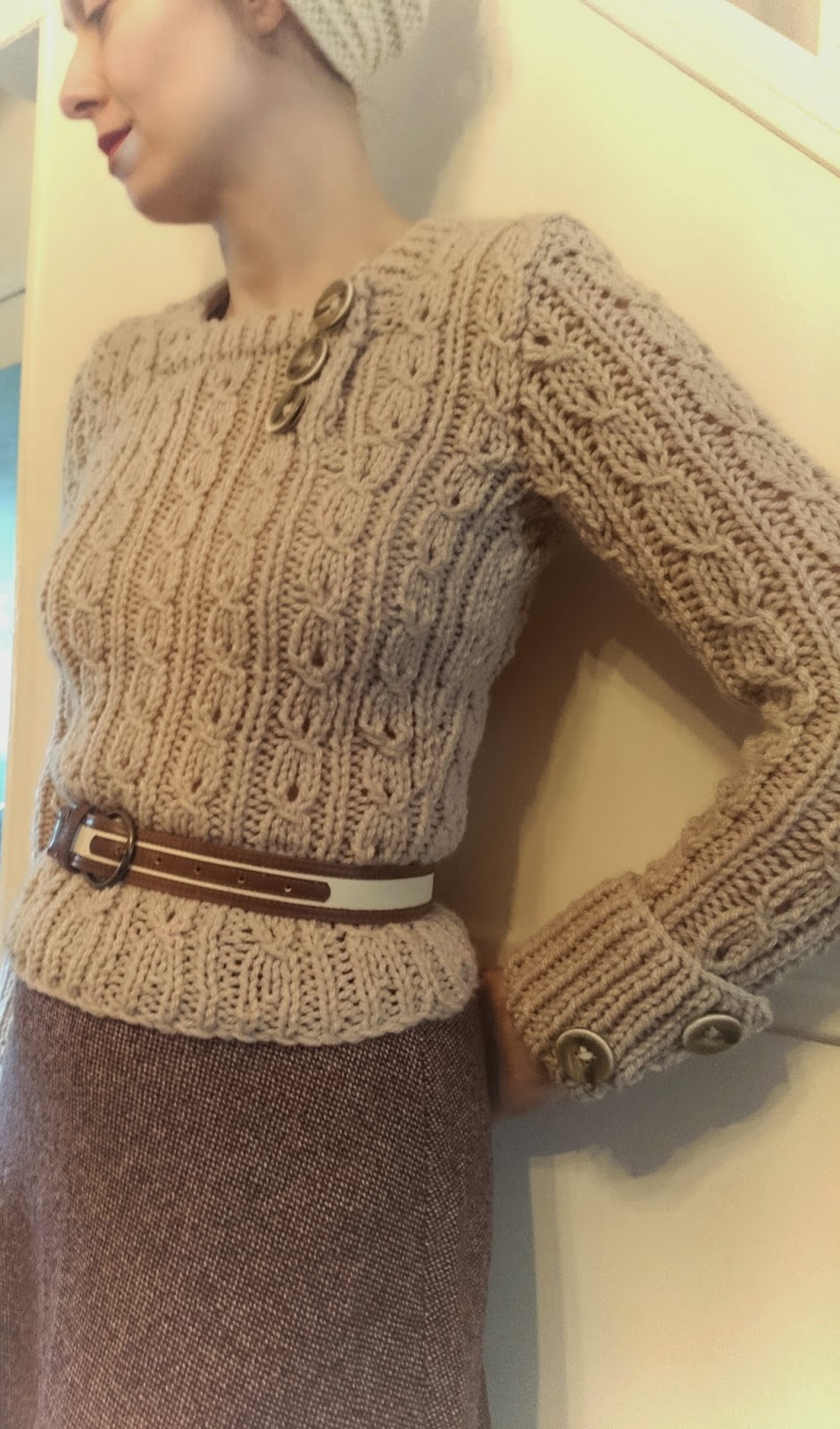 This pic was taken by my 5 year old son!

This was a very quick knit - it took just over a week to complete. Bear in mind that I only really knit in the evening for about an hour or two. Sewing up was a lot quicker, too. All in all, it probably took about 15 hours. And, another thing in acrylic's favour: it took just 4 balls, at 160m each, which came to a grand total of £6.40. Bought at Walthamstow market. The cheapest jumper EVER. But hopefully not in a bad way. 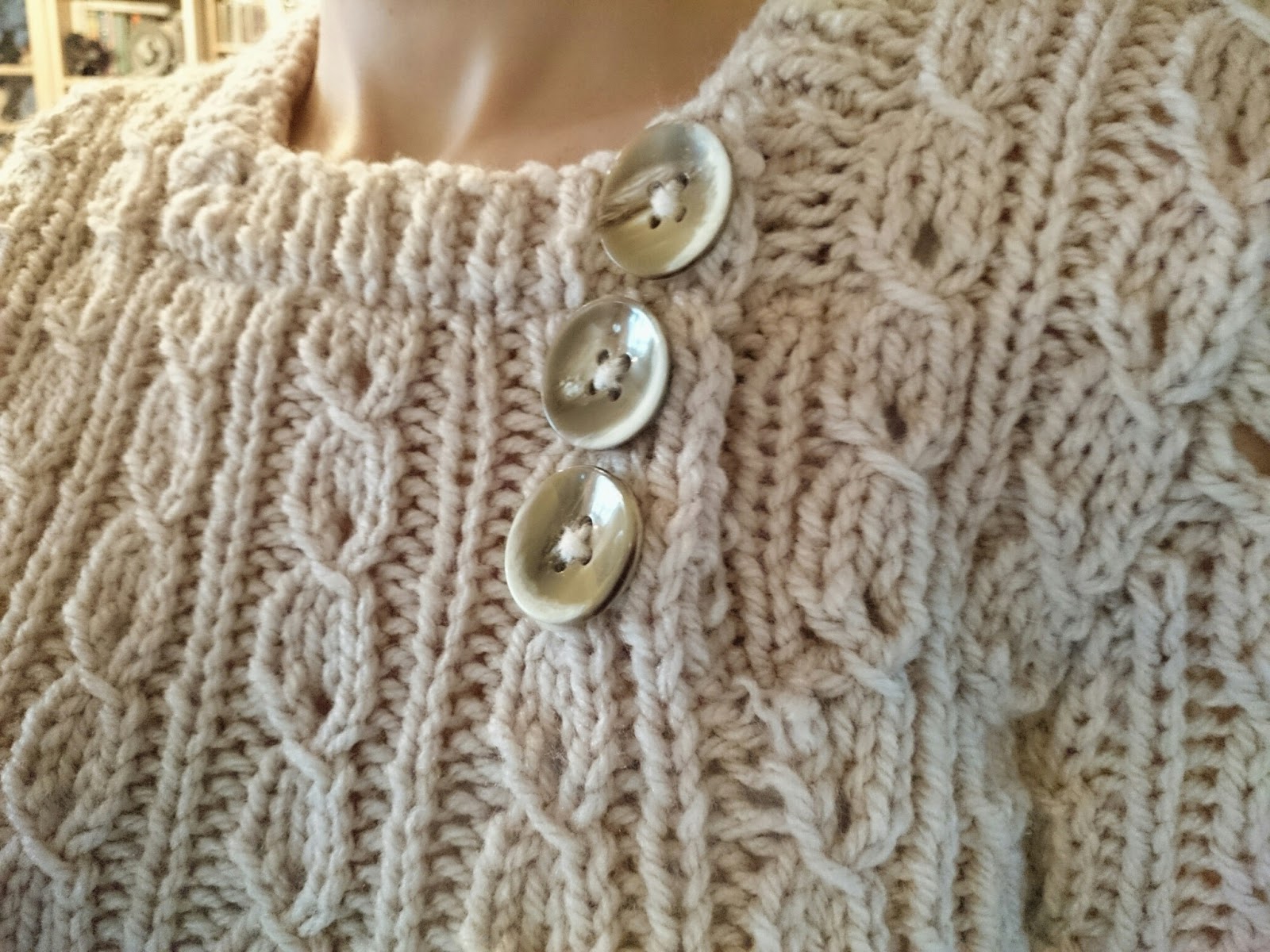 If you are going to attempt this, take care when knitting the sleeves. I came unstuck on the right sleeve and had to re-knit it from the beginning as I had cast on 11 sts after the turn-back cuff at the wrong side, putting the cuff at the back! The armhole depth was pleasingly deeper than I expected, too: usually it is six inches and you can't lift your arms, but this is about seven and a half. The neck is deeper, too, which means I can get it over my head without undoing the buttons. 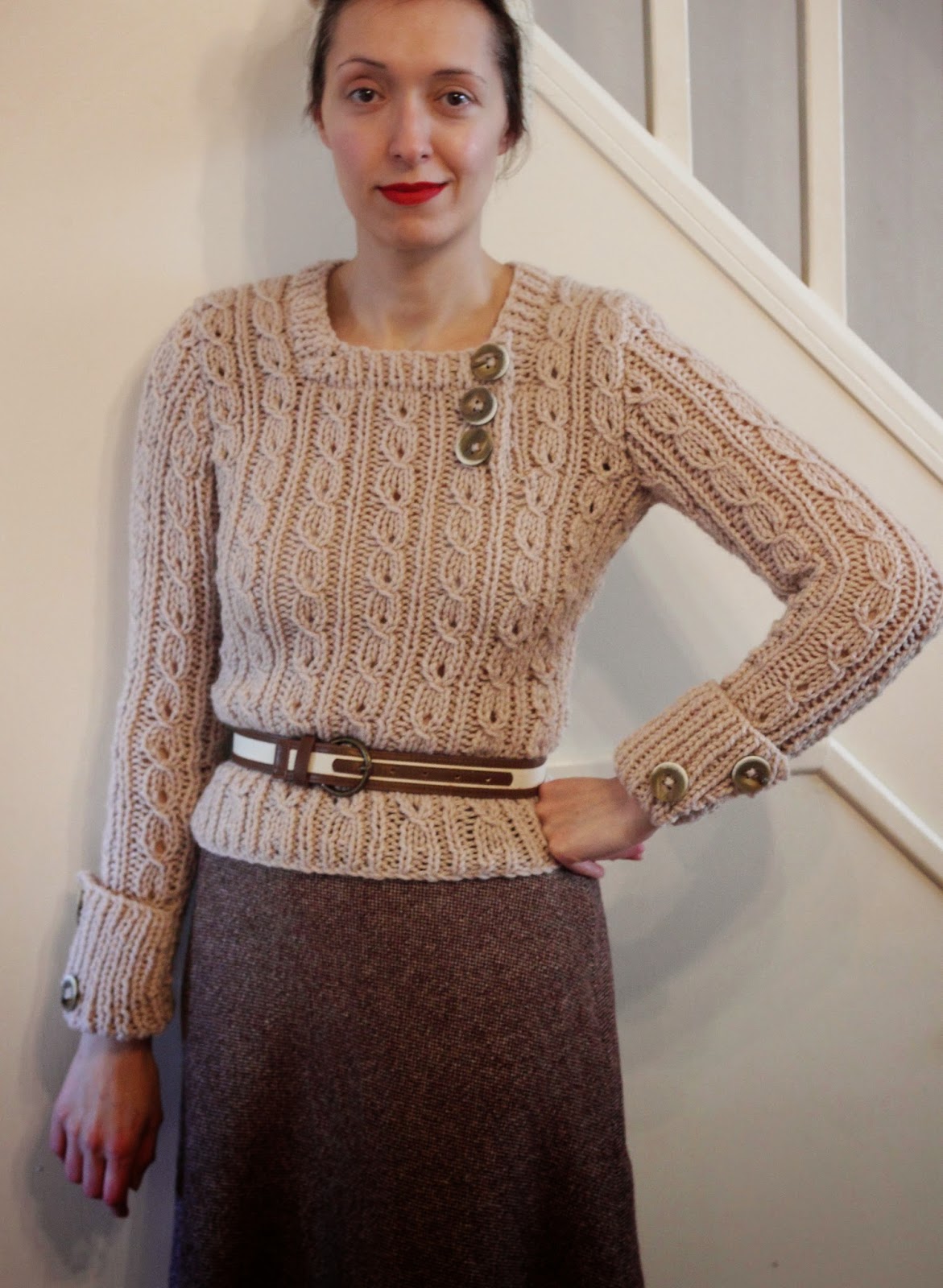 If I were to knit it again, I would certainly use wool, or a wool mix. I have already swatched it in Drops Nepal (aran/worsted weight), which I used for Quick Work In Thick Wool. It will work, but only if I go up a needle size to 8mm, even 9mm, and then it will be snug, and possibly too open and airy. Hmm. But I cannot buy more wool! 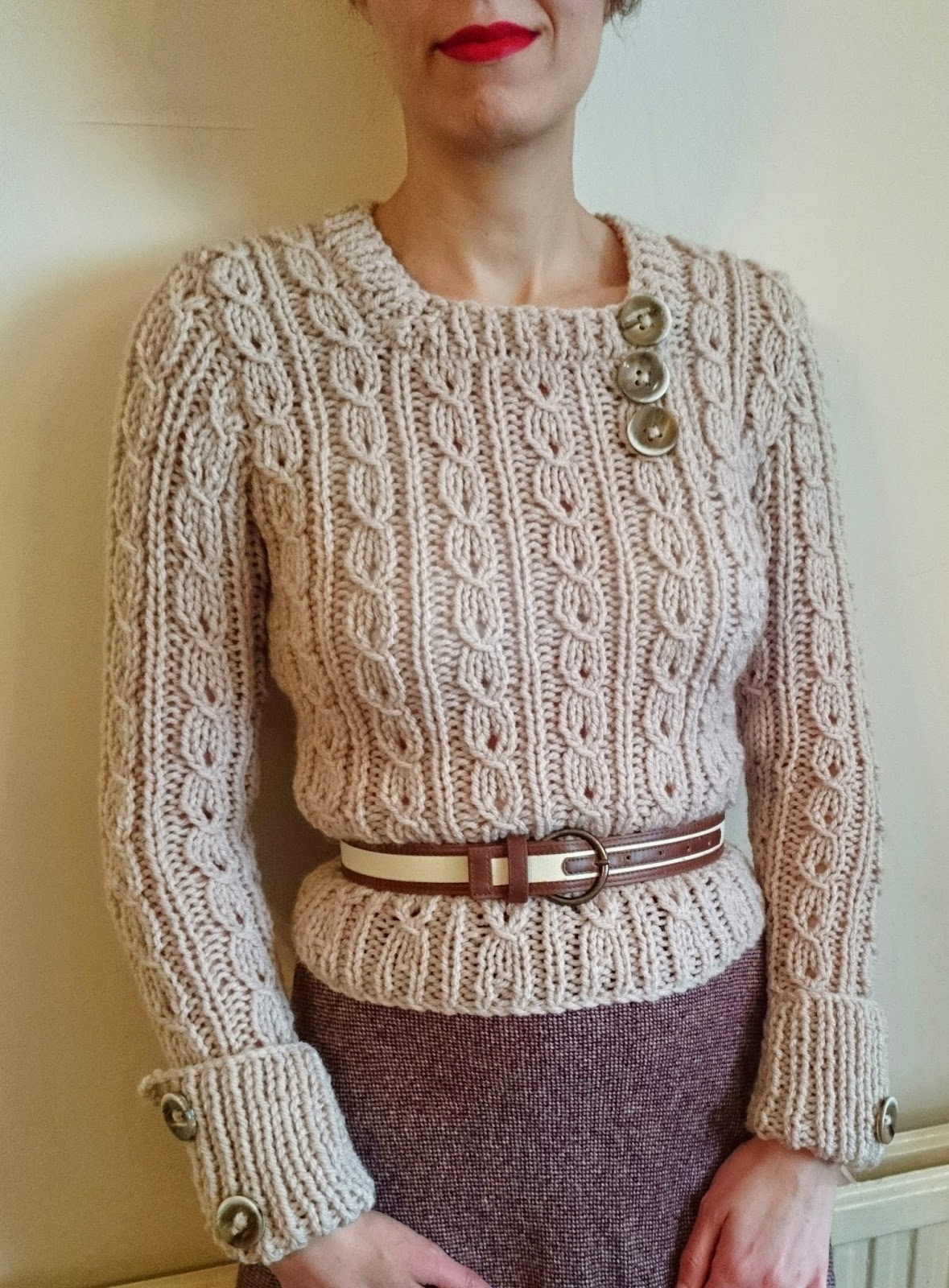 I have plenty to be getting on with. My (or, rather) Your Victory Jumper is coming along nicely, but I musn't rest on my laurels, or I'll never finish it.

I haven't had much time this week. My little girl has been off nursery with chicken pox, poor little mite. Hence my hasty pics. She will be better for Easter, but my son might have it by then!

Here is the free pattern, along with its friend on the same page: 'Jumper with a Turreted collar'. 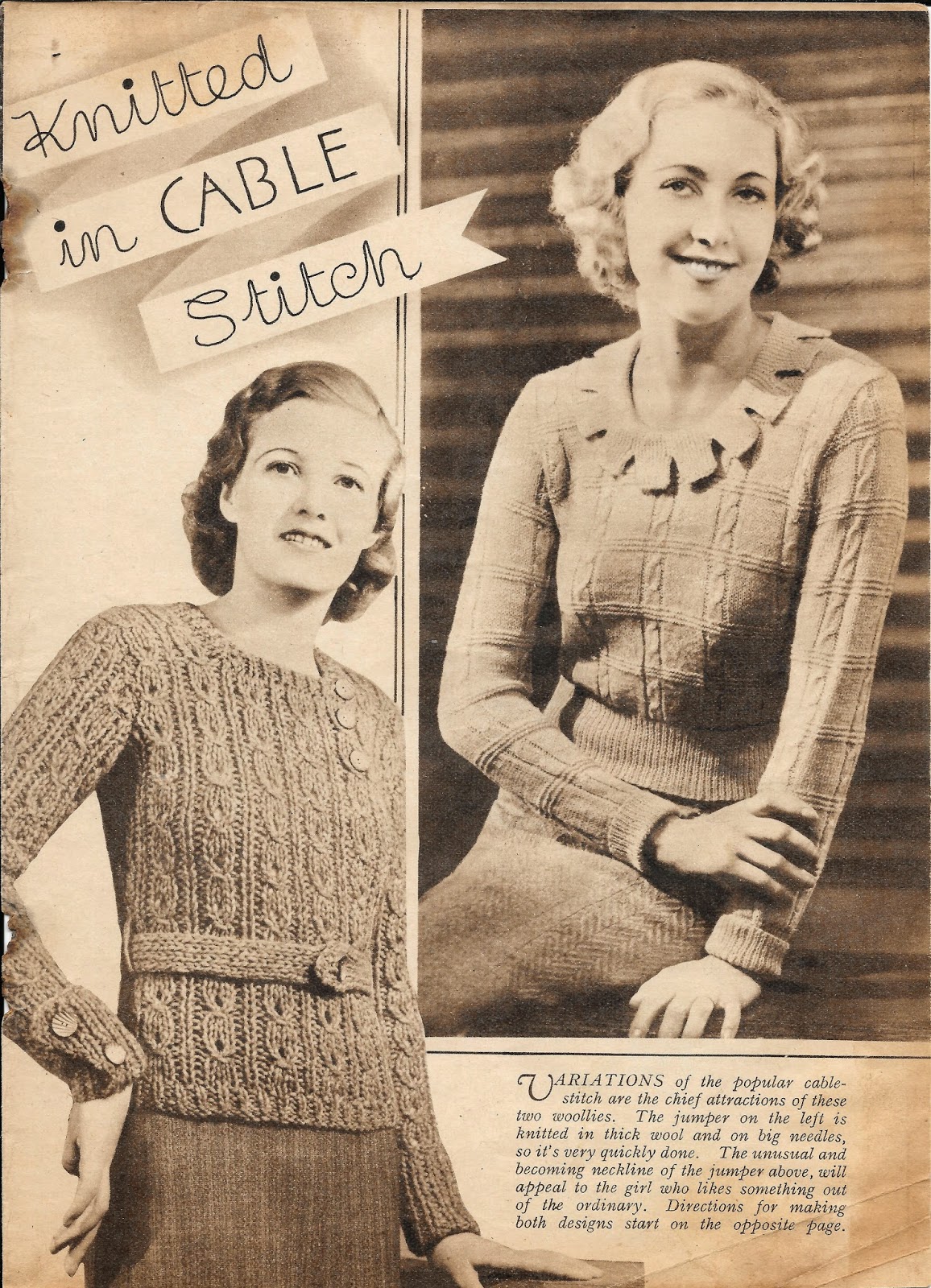 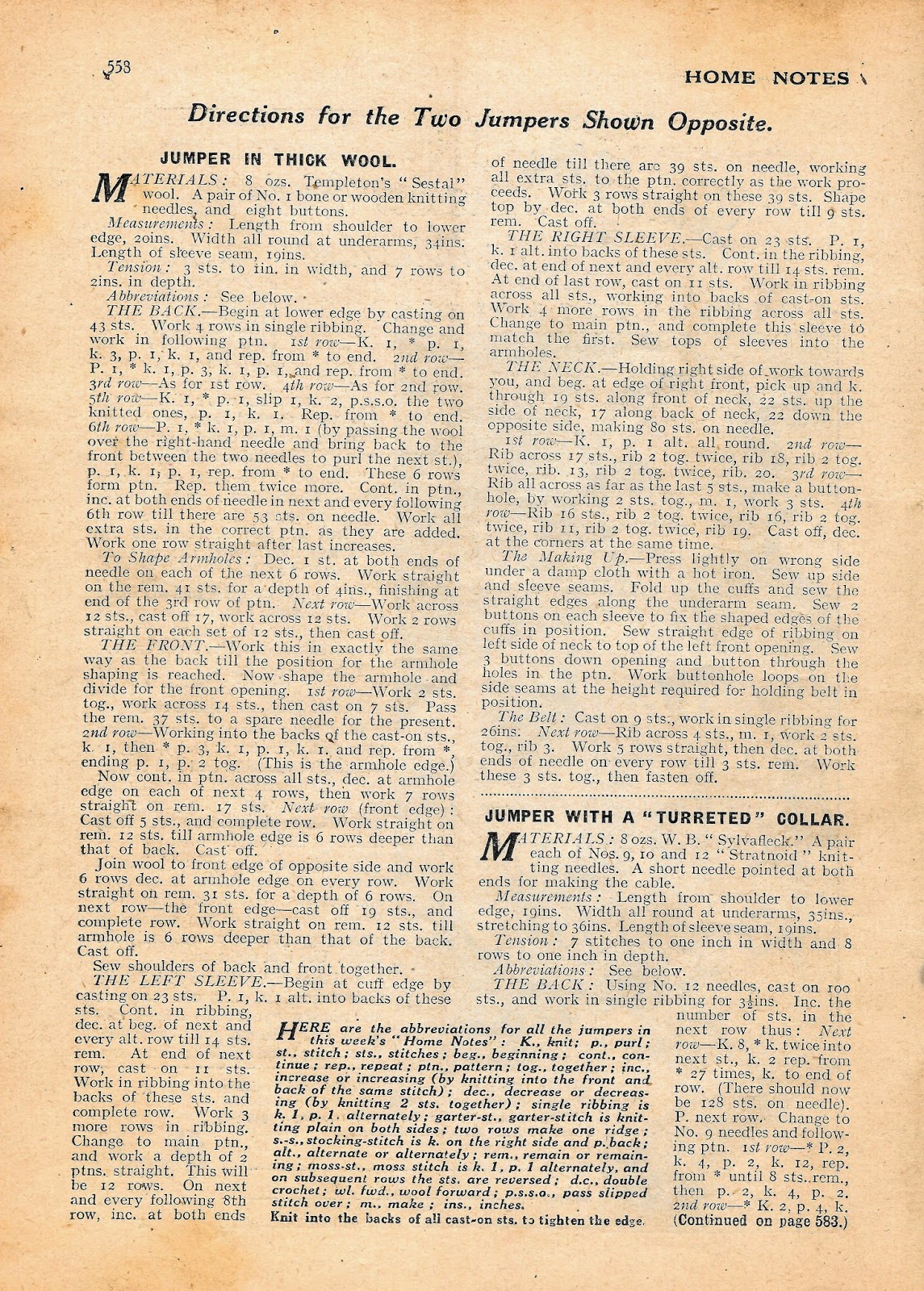 I hope you have fun with them.

Out and about in my London

Last week I was feeling more myself again, and the relief that came with it made me get off my butt and go out dancing on Monday, and to Spitalfields market on Thursday. (Let's not talk about this week).

Monday is Balboa night here in London, at least in my London. Swing at the Blueberry is run by amazing Balboa teachers - Natasha Hall and Paul Crook. I, and many others long to emulate their smooth, cool, understated style. On Monday Natasha was alone, as Paul was taken ill at the last minute, (probably that dreaded lurgy)! Natasha switched between male leading and female follower steps effortlessly, and taught us some sweet variations on the basic moves, which I have been practising a bit since. It felt so good to be out and dancing, (and having a couple of beers didn't hurt my mood either).

On Thursday I ventured to Spitalfields market, as it was antique day. I say ventured, it is only a short train ride away, I'm just quite lazy. I got there around 10am, and saw lots of stall holders still setting up, then realized they were the traders selling new goods, so I toodled over to the other side, where the seasoned antique dealers were already sipping coffee and chatting to each other amiably, having already set up their wares. It is thanks to the Sunny Stitcher that I remembered about the antiques on a Thursday, and I'm pleased to report that it was quite a fruitful trip. I needed some buttons for a couple of jumpers, and found some 1930s ones. 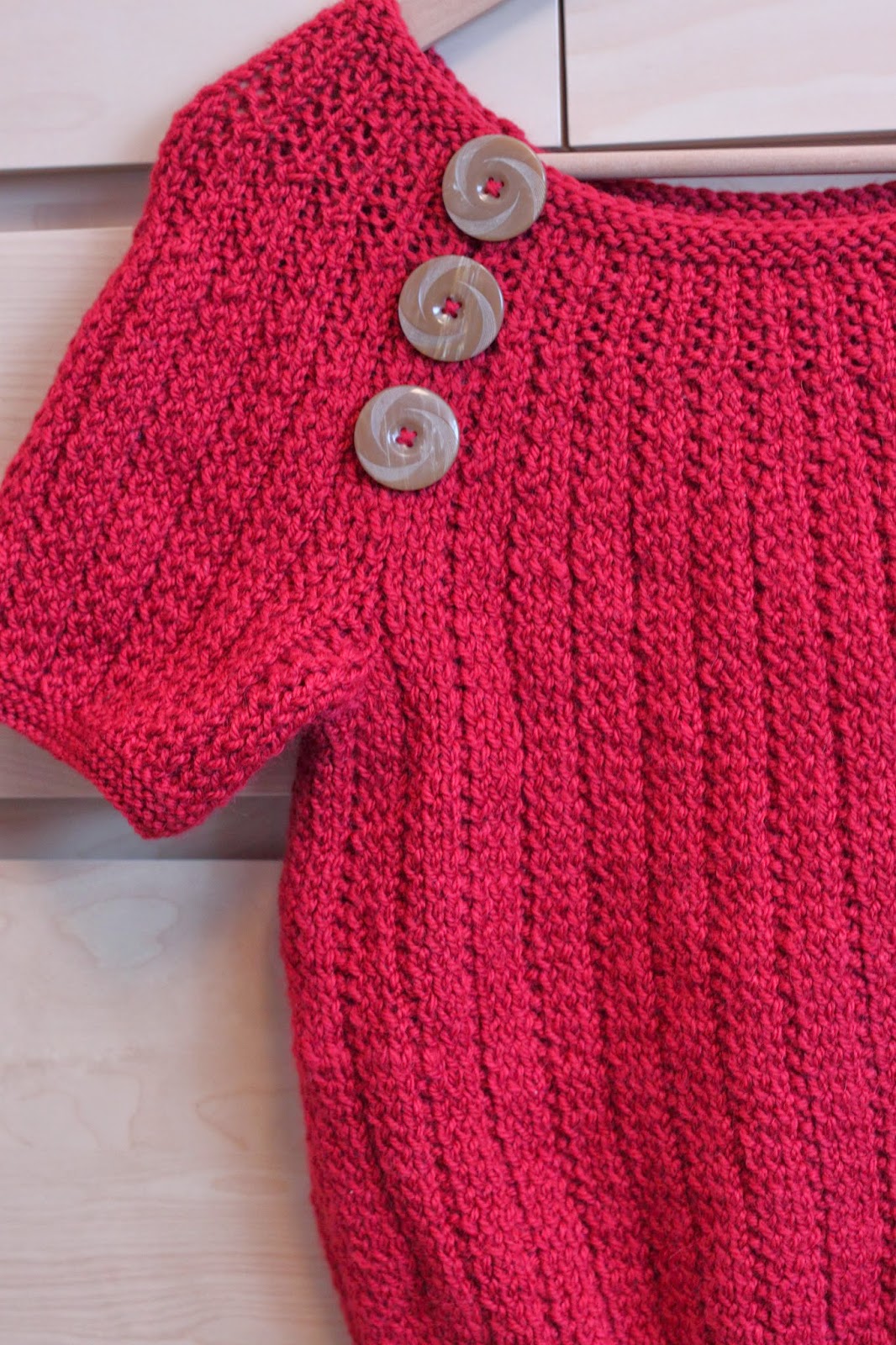 Spurred on by my find, I even managed to finish this jumper, that had been languishing patiently in a drawer. I'm glad I didn't just use any old buttons.

It is from volume 2 of A Stitch in Time, Quick Work In Thick Wool. I have to say it was pretty quick, even though I cast on about 3 years ago! 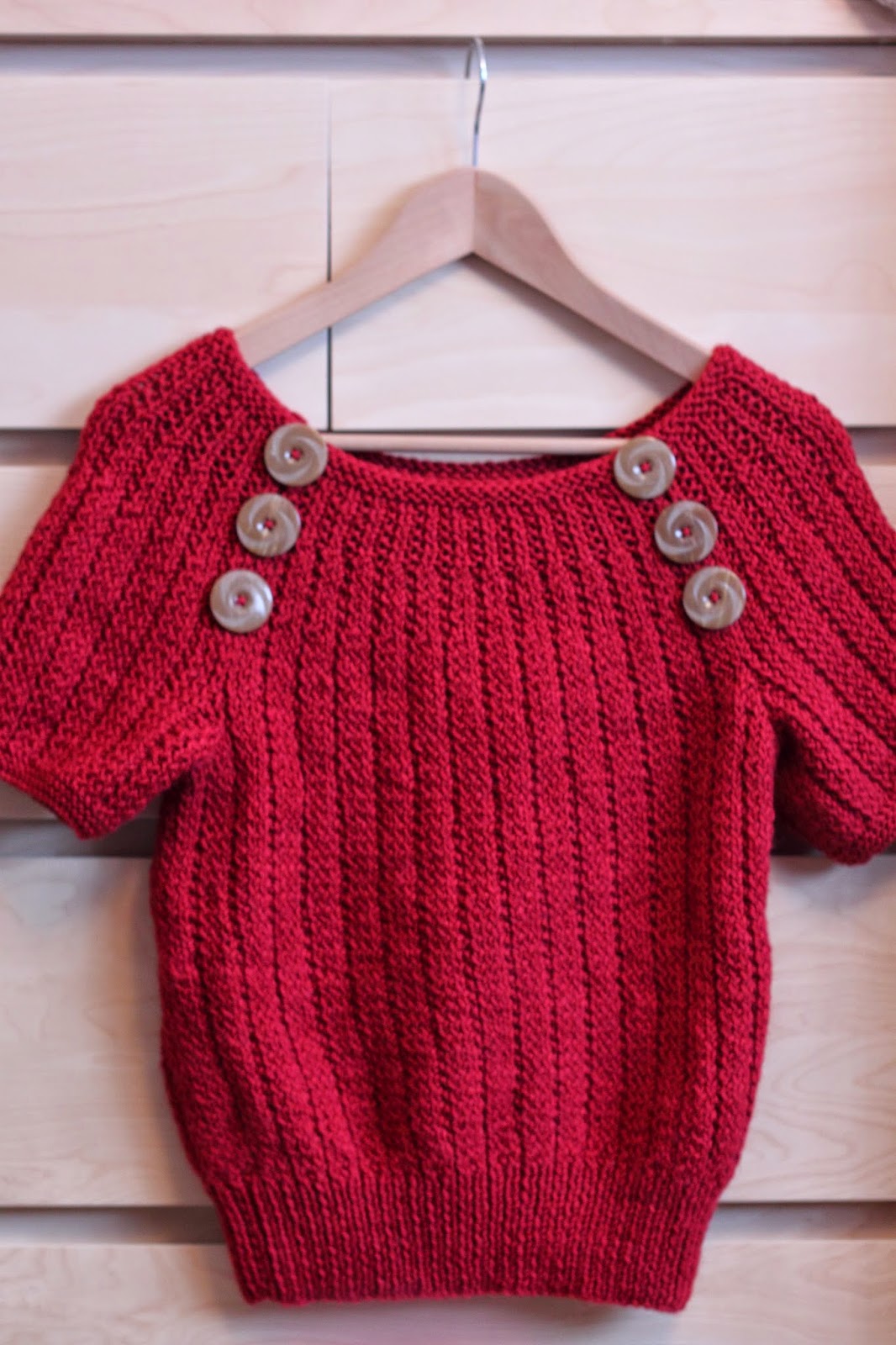 I used Drops Nepal, a wool and alpaca blend.

When I think of the knitting designs of the 1930s, I immediately think of 3 ply wool, not aran, which is used in the above design, and never chunky weight. That is until I found this design from a 1936 edition of Home Notes magazine. 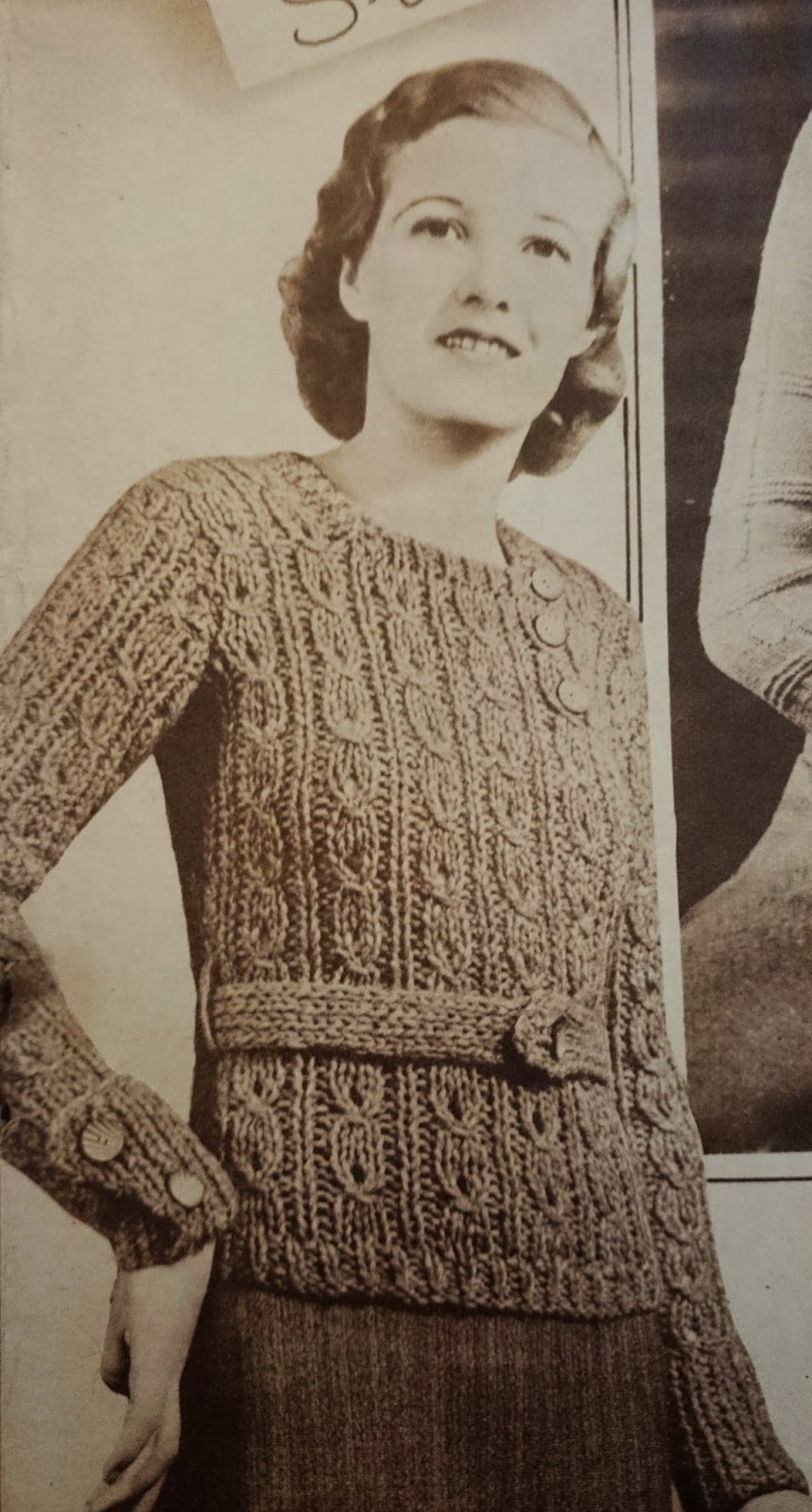 Knit on No.1 needles, (old English), 7.5mm metric. I used 7mm which gave me the reqiured 3 sts to the inch. Called 'Jumper in Thick Wool', it was indeed a very quick knit. I started it the middle of last week, and I'm sewing it up now. I don't think I will knit the belt, but use a leather one instead, to cut down on the bulkiness. I will follow up with the finished garment in my next post.

Here are the rest of the goodies I found. The buttons are for the jumper above, with the magazine it is from beneath it. (That wasn't found at Spitalfields). A couple of patterns for tea cozies, and two late 40s jumper patterns. 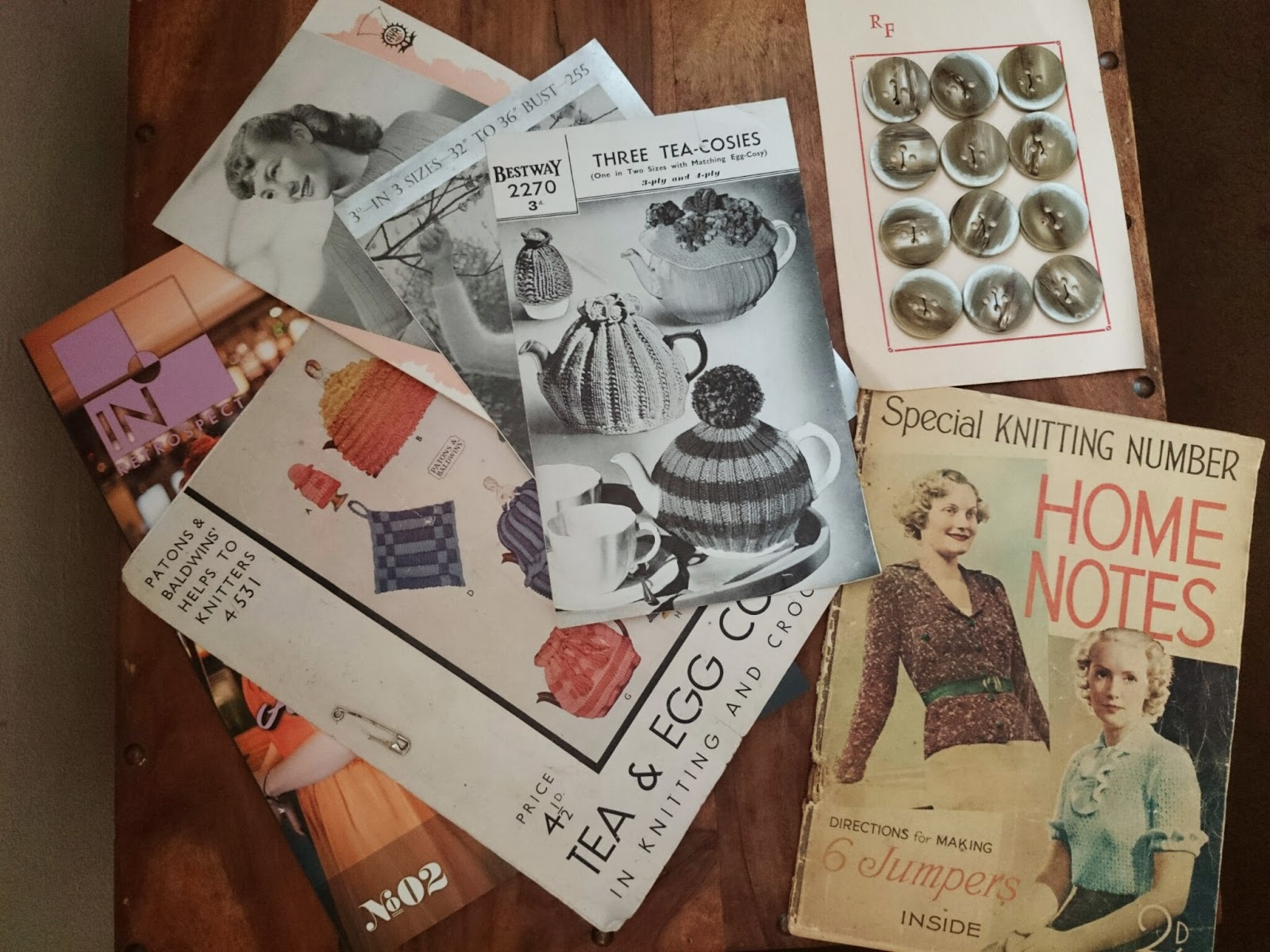 You can just see In Retrospect magazine poking out underneath them all, the new vintage magazine by Matt Keller. It's the second issue, and I was happy to see an article on vintage knitting in it. Let's hope there will be more of those in the future! 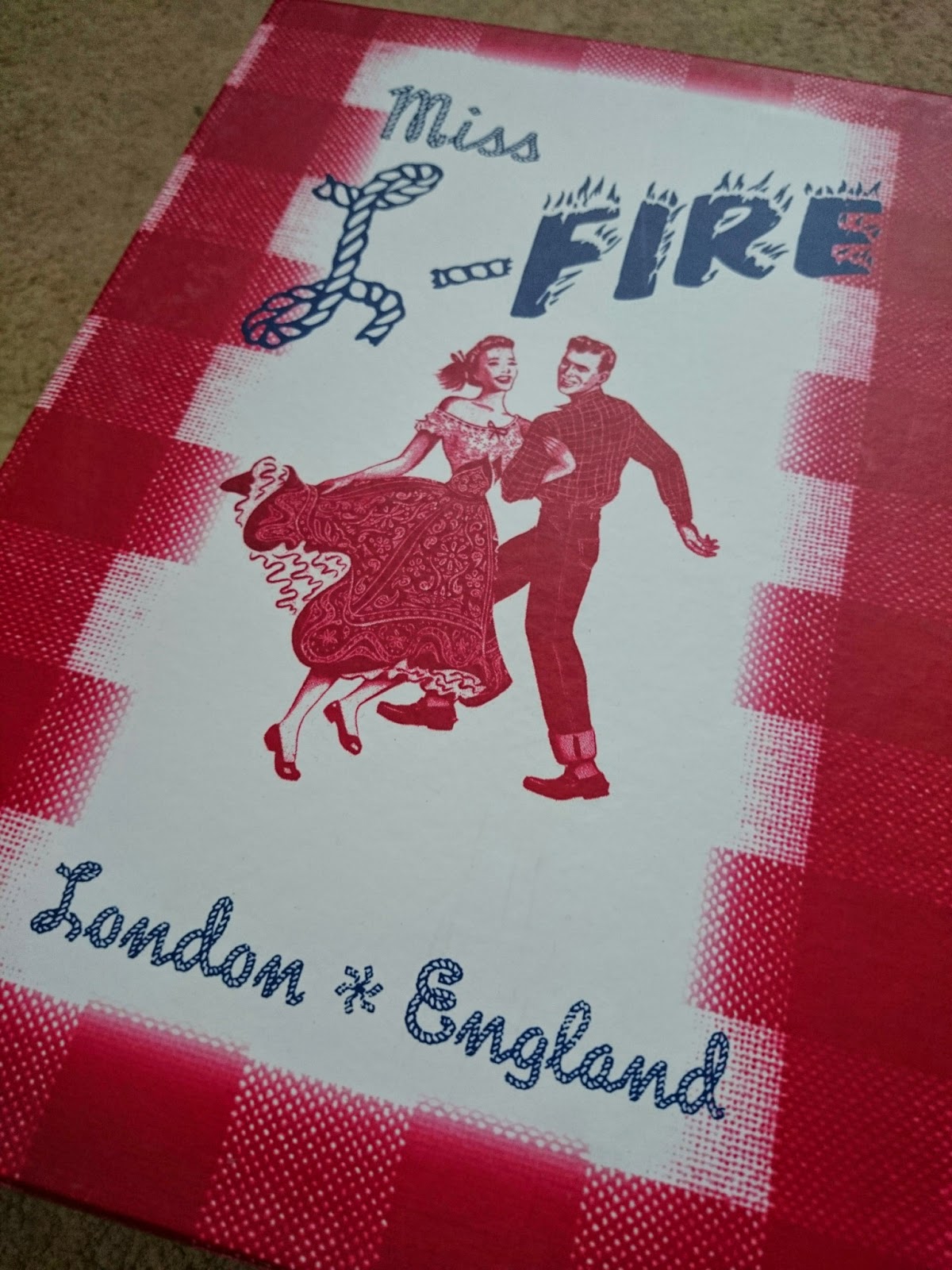 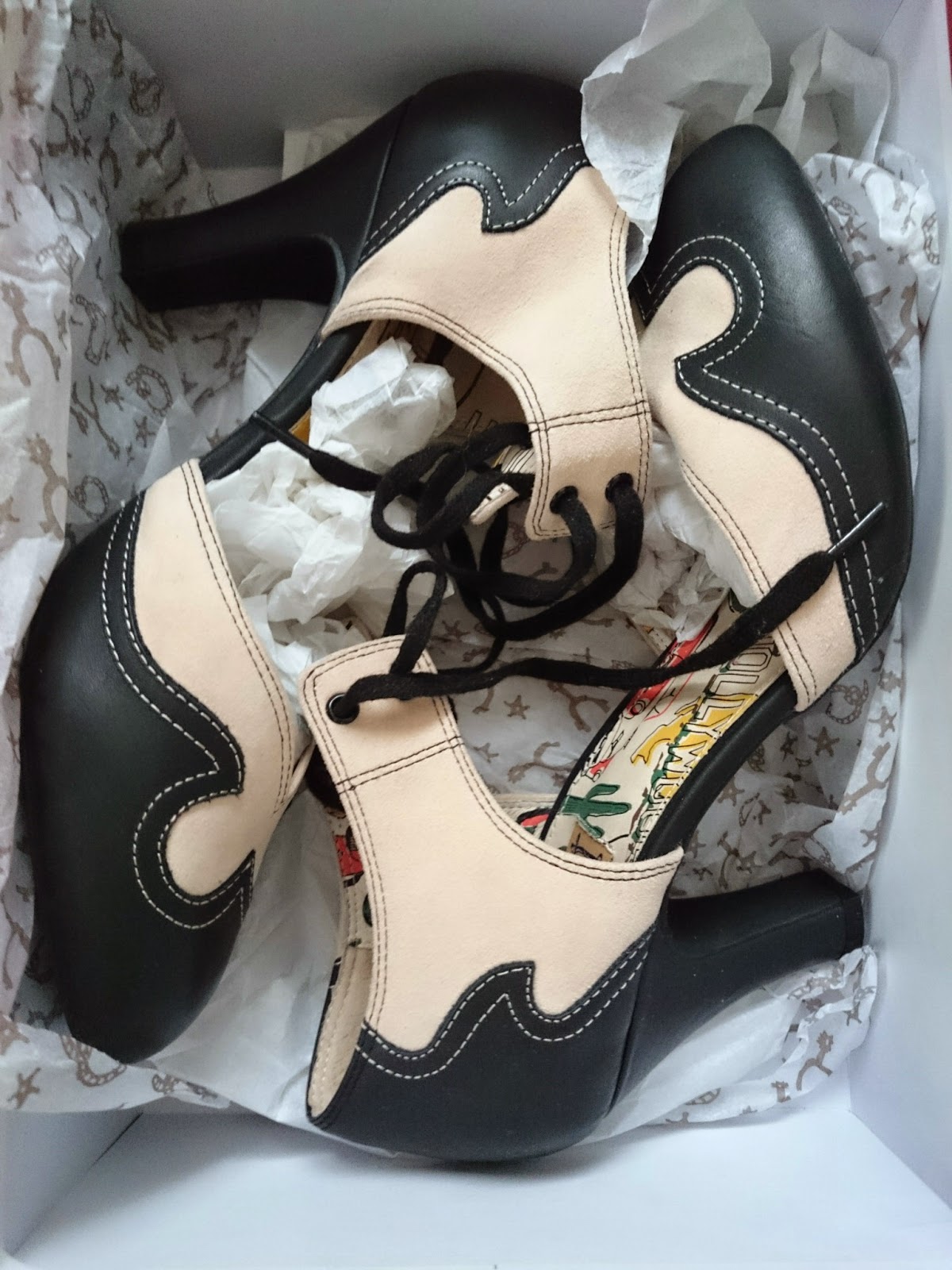 I had a bit of a splurge in Collectif, while I was in Spitalfields, but I felt I deserved it after being ill for so long. And they are for dancing. I've been wanting to try on some Miss L-Fire shoes for a while, as friends had been raving about them. They were in the sale, otherwise I wouldn't have entertained them. I have some very similar, from Topshop years ago, but they have a stiletto heel, so completely different.

I have at last photographed my Starring Stripes jumper. I wore it when I to Spitalfields, with my cream knitted turban, but failed to get a photo of me wearing either. 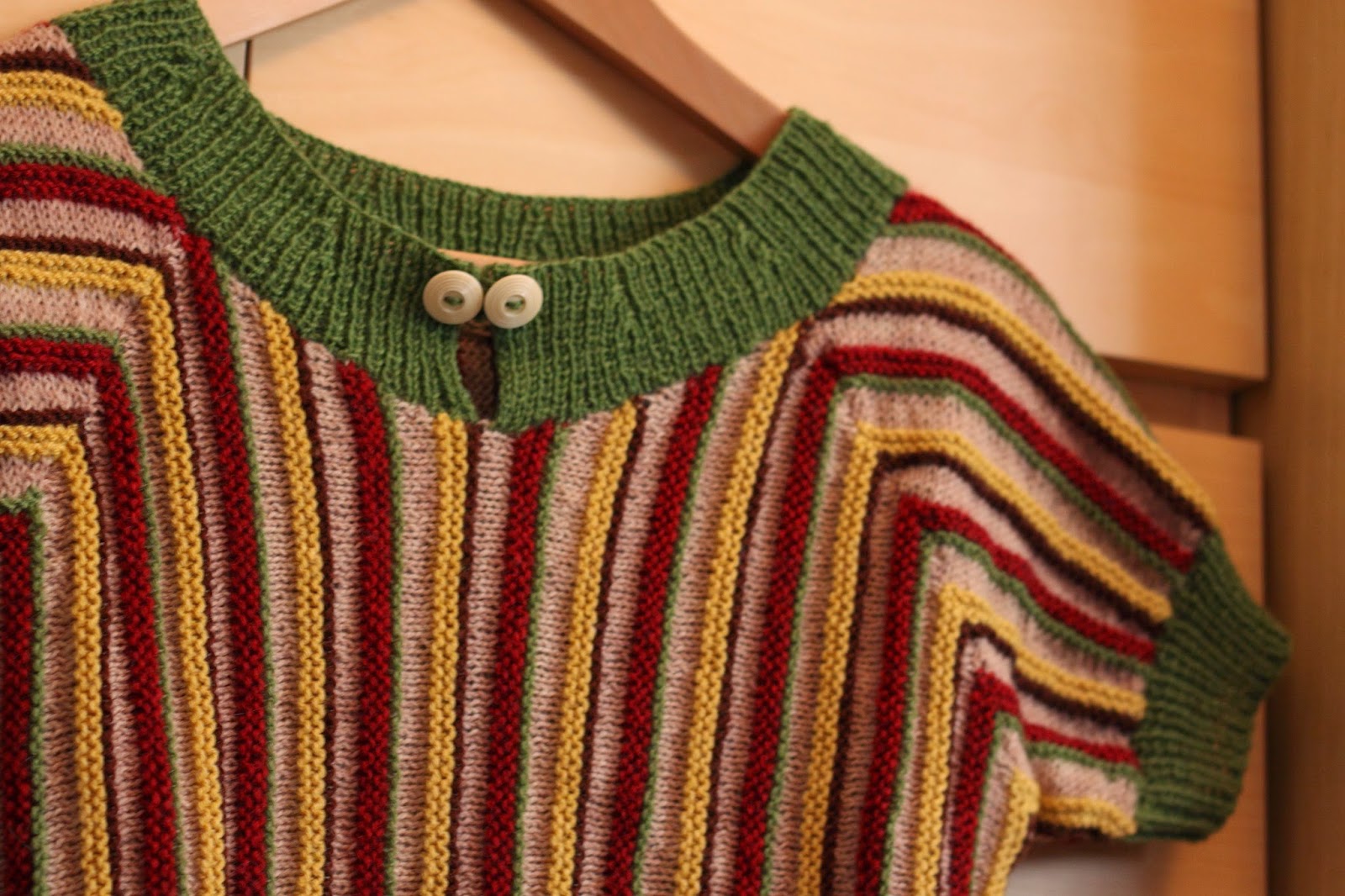 The colours aren't quite as they are in real life, but I couldn't seem to get the right setting on my camera. They are an almost perfect match to the original colours of the model in the pattern though, which I am very pleased about. 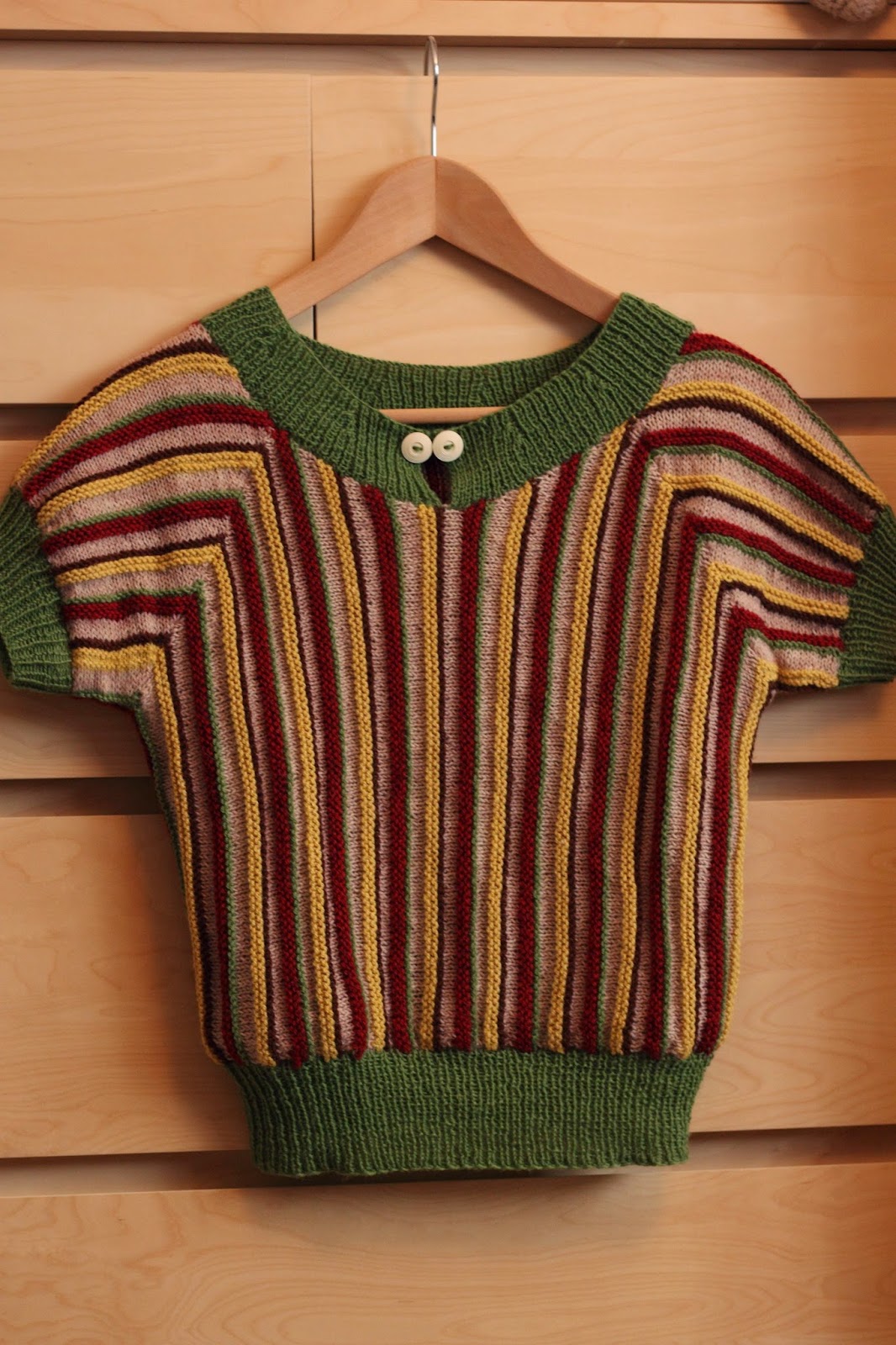 Thanks again to Liz from zilredloh for sharing this wonderful pattern with us.

Back to my sewing up!

I'm changing my name to Chesty LaRue. I'm still fighting this chest infection with the help of yet more penicillin. I'm not knocking it. I'm not anti antibiotics, like so many people, but they have probably never really needed them to like, you know, save their actual lives. There, rant over. I have a story about how antibiotics did actually save my life once, but I'll bore you with that another time. (It does have a knitting connection - a major one).

This post is about knitting, as it should be. A knitted turban to be precise. After seeing a pattern for a vintage 1940s turban on The Vintage Pattern Files, and knitting it, I thought I would do another in a lacy stitch. As I didn't do a free pattern for February - (did I tell you I was ill?) - it is a bit overdue. 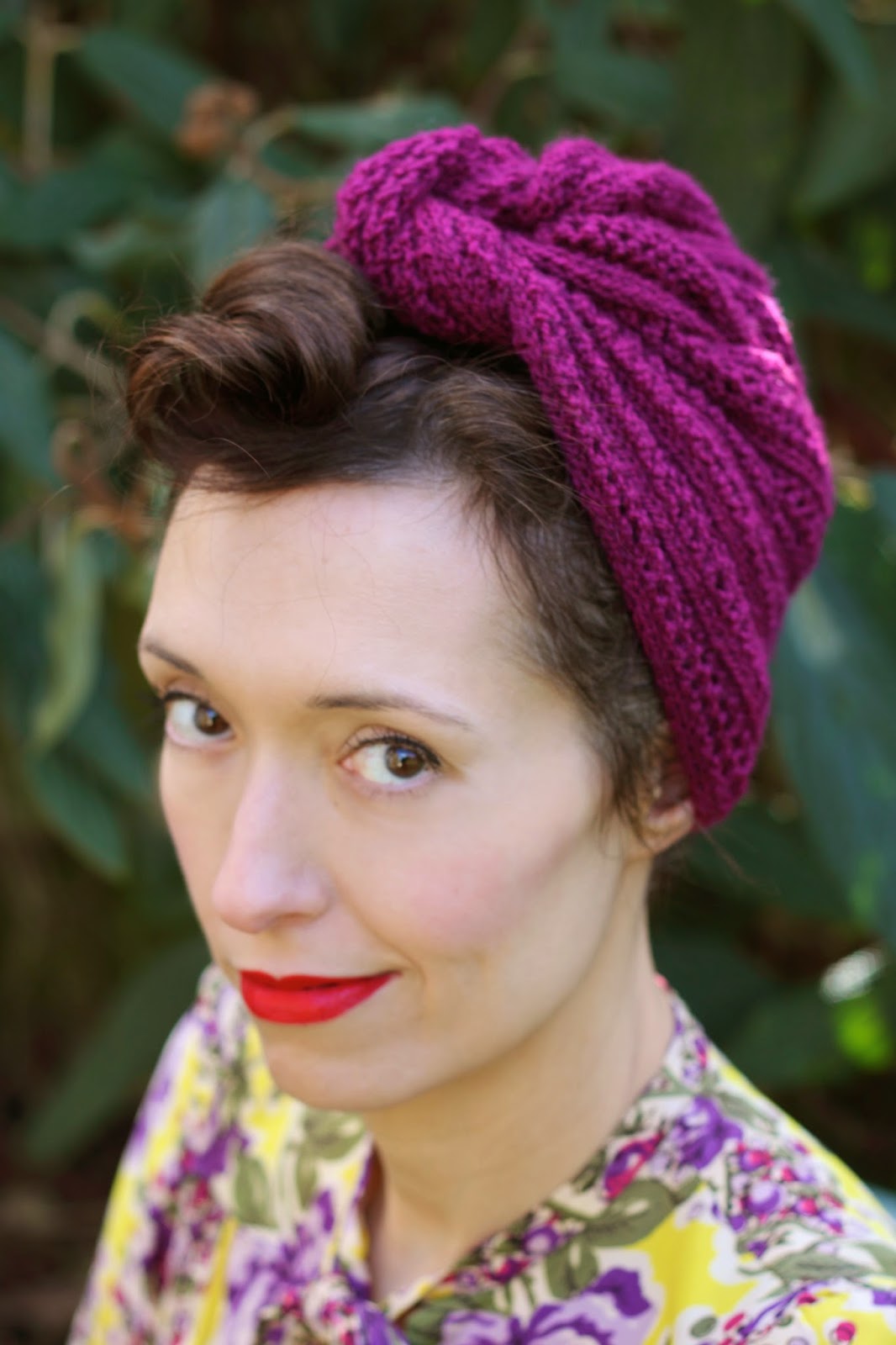 The yarn I used is called Semilla, by BC Garn. I picked it up at Nest a while ago, for no particular project in mind, I just couldn't resist the shade. It only took two balls, as the meterage is very generous for a DK weight at 160m to 50g. I think it was under a fiver too. It is 100% organic wool, and has a good firm twist to it. Any DK weight yarn would work though. The original vintage turban pattern is done in 3 ply, but I just couldn't face all that knitting, and actually knit the vintage one in aran weight wool, which was a super quick knit. This one took a little longer, but still a lot quicker than with 3 or 4 ply. 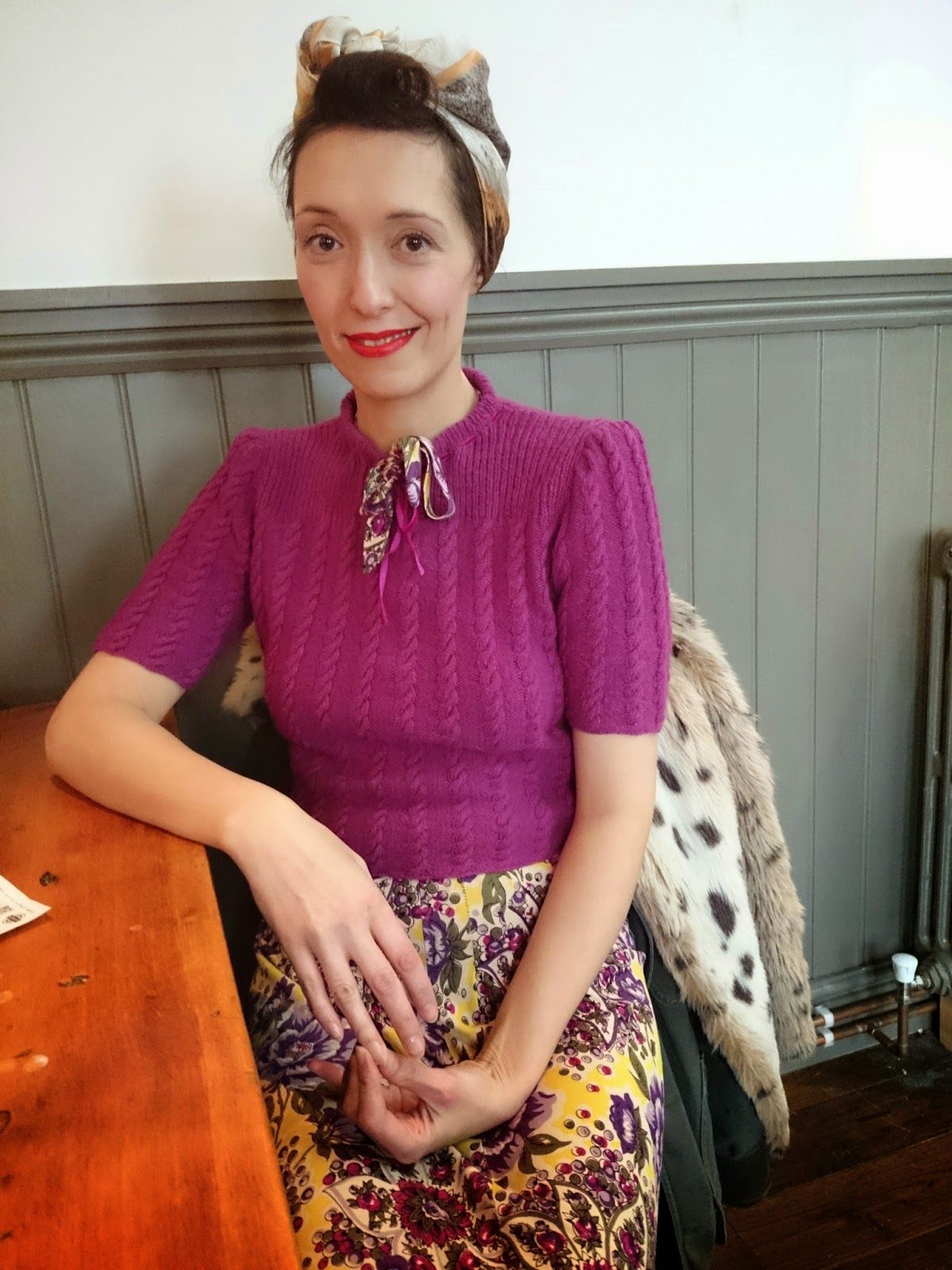 I am very happy with it, as it goes with my 1940s dress and Copleys cable knit jumper. The pattern has a lot of stretch width-wise which is what I wanted, to cover my ears on a cold day. 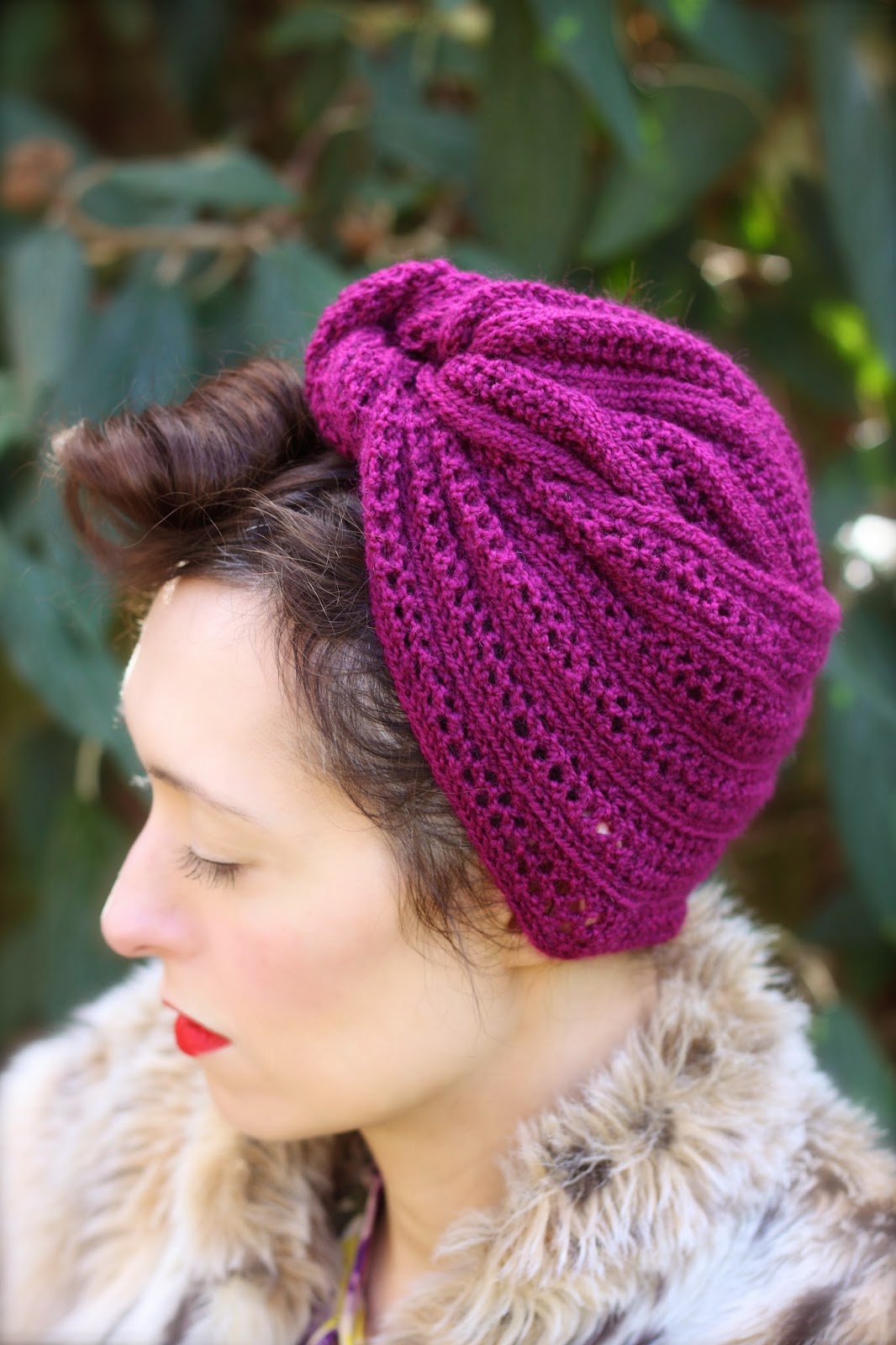 The photos were taken by my good friend, Shanthi, whom I've known since I was 18. She's always had a keen eye when it comes to taking a good pic, so I went over to her place, and we went out in the garden, It was cold sunny day, perfect weather. 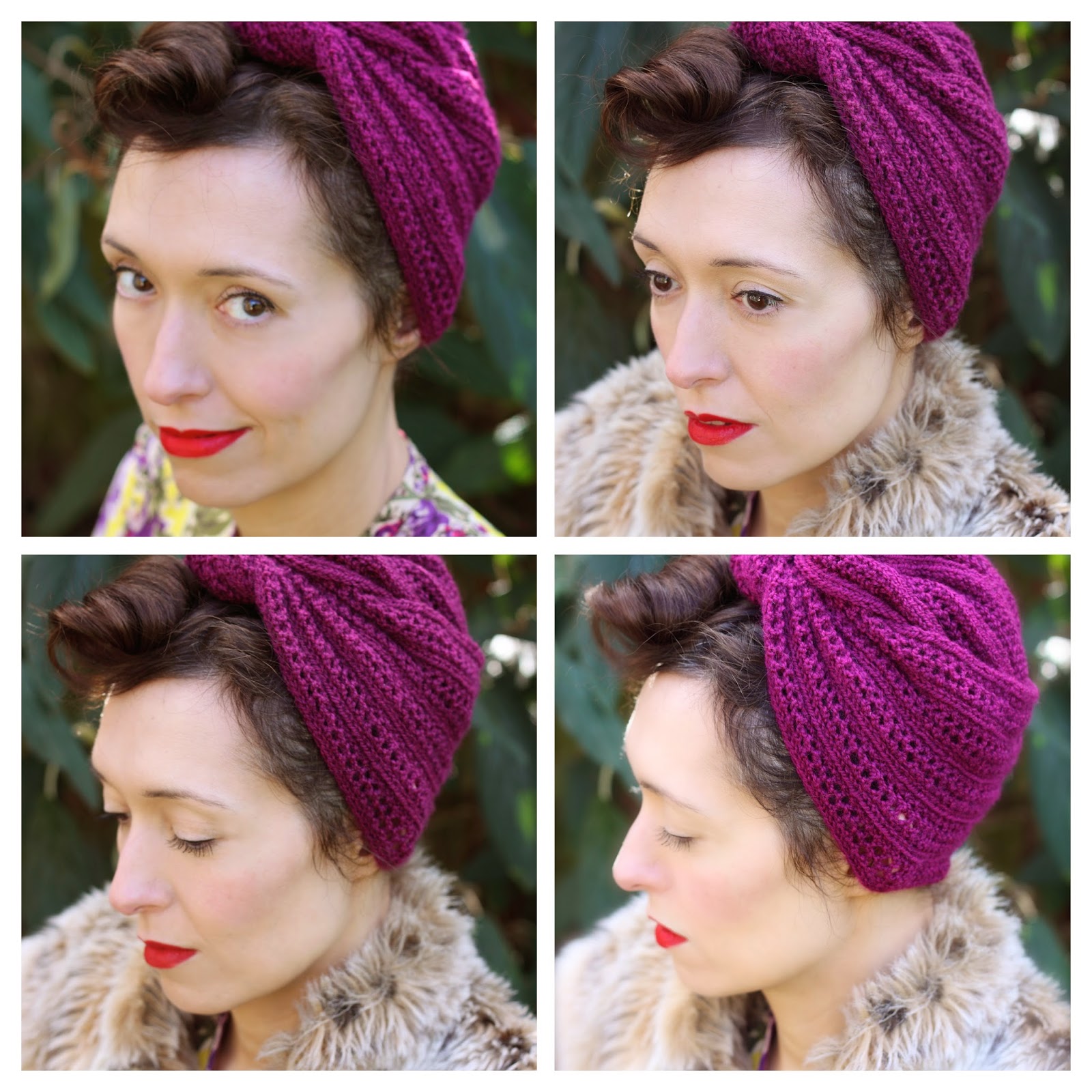 She captured the colours perfectly. 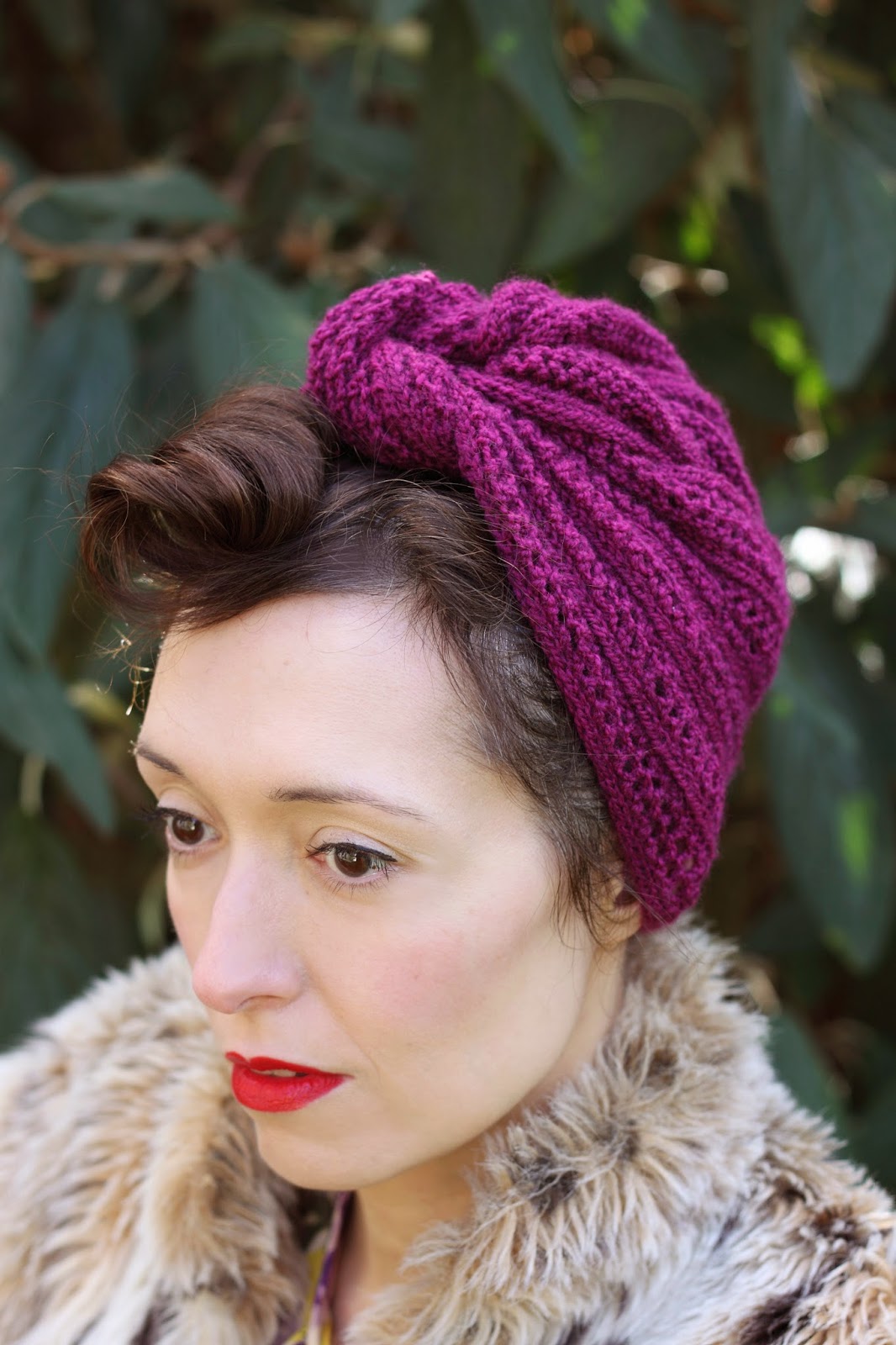 I have put the pattern on a new page, called 'Free knitting patterns'. You can find it under the banner at the top of the page, or here. 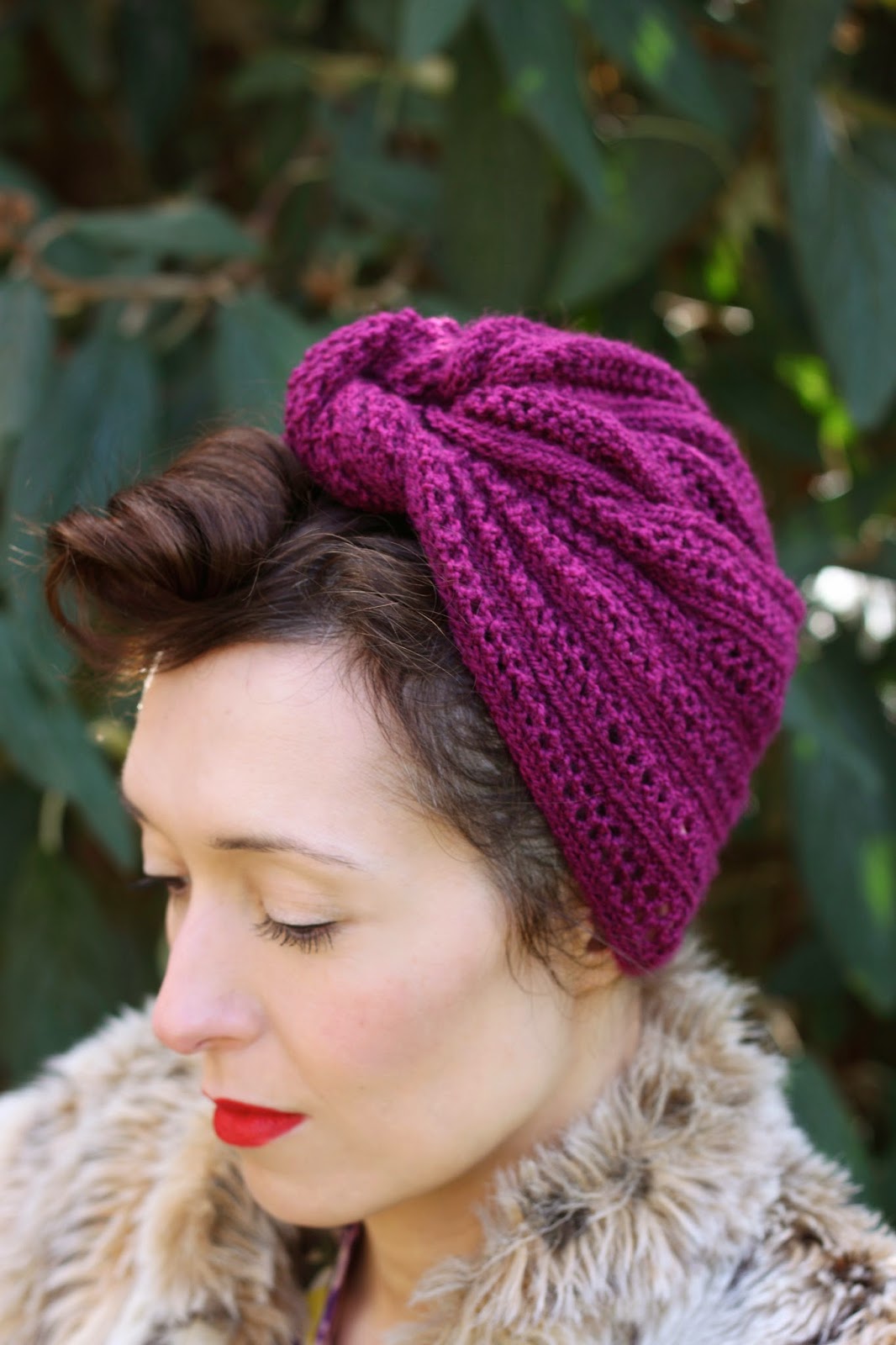 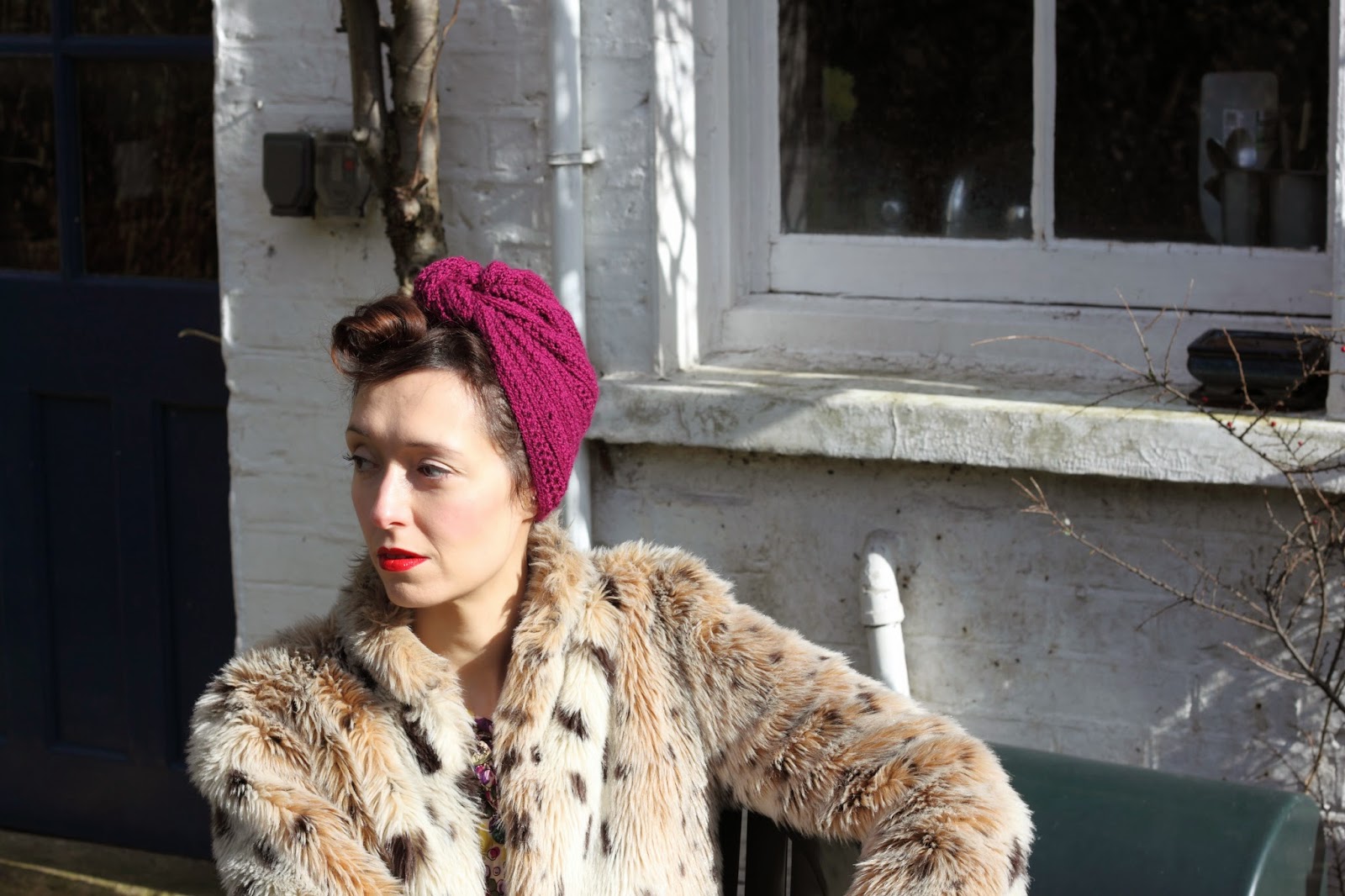 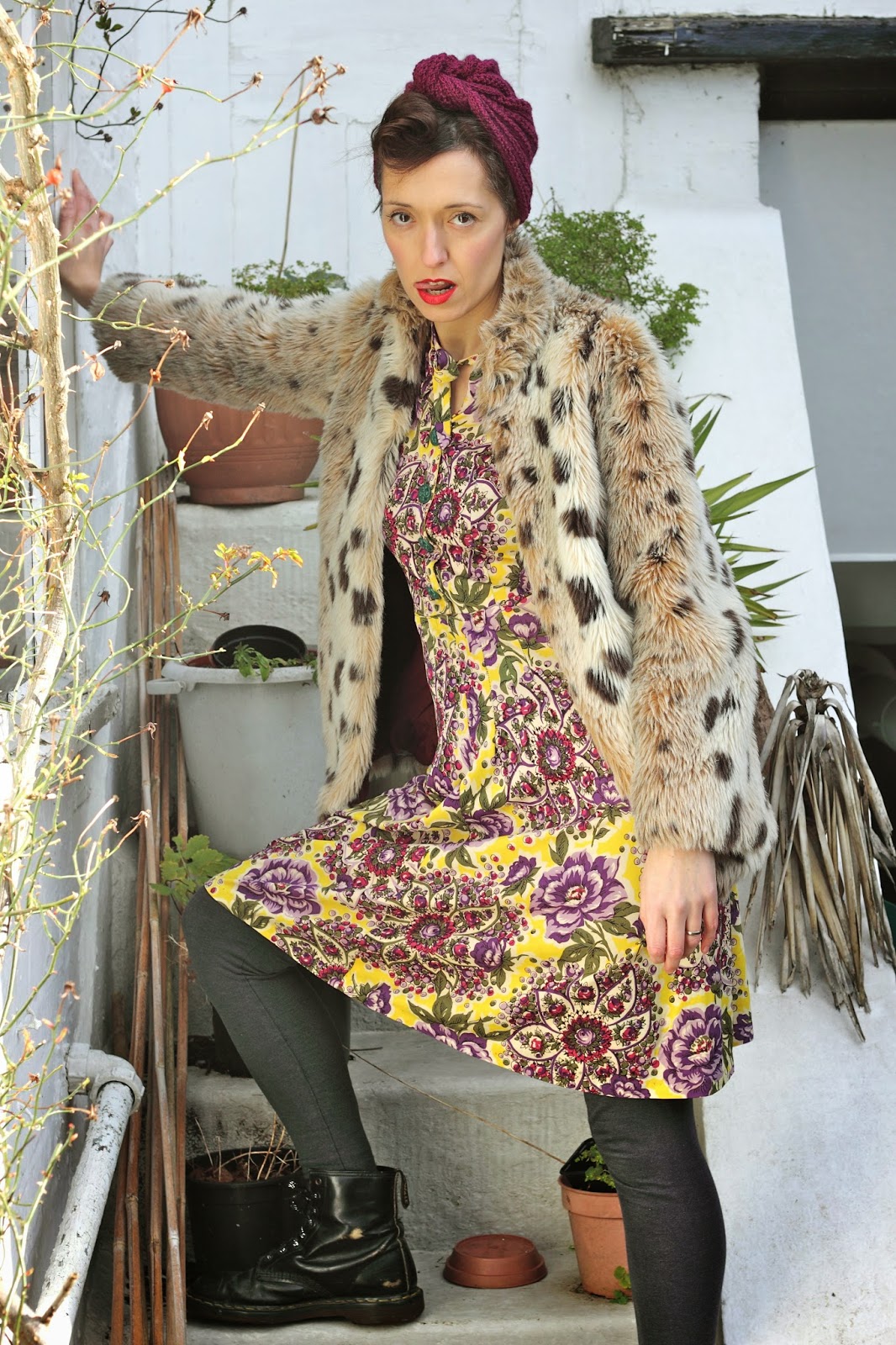 We had a bit of fun with the styling.

I found my old Doc Martens recently, in the loft at my mum and dad's, so I've been living in them. I've always loved clashing colours and fabrics, so teaming my 40s dress with a faux leopard print jacket felt right. I have to admit I get slightly bored of dressing vintage head to toe, (sorry)! It's good to grunge it up a bit.

I have been listening to a lot of music from the 90s again, as my husband and I have just launched a night at our local here in Walthamstow. It's called Mixtape, and we play a mix of 80s and 90s stuff. This probably explains my fashion choices right now. 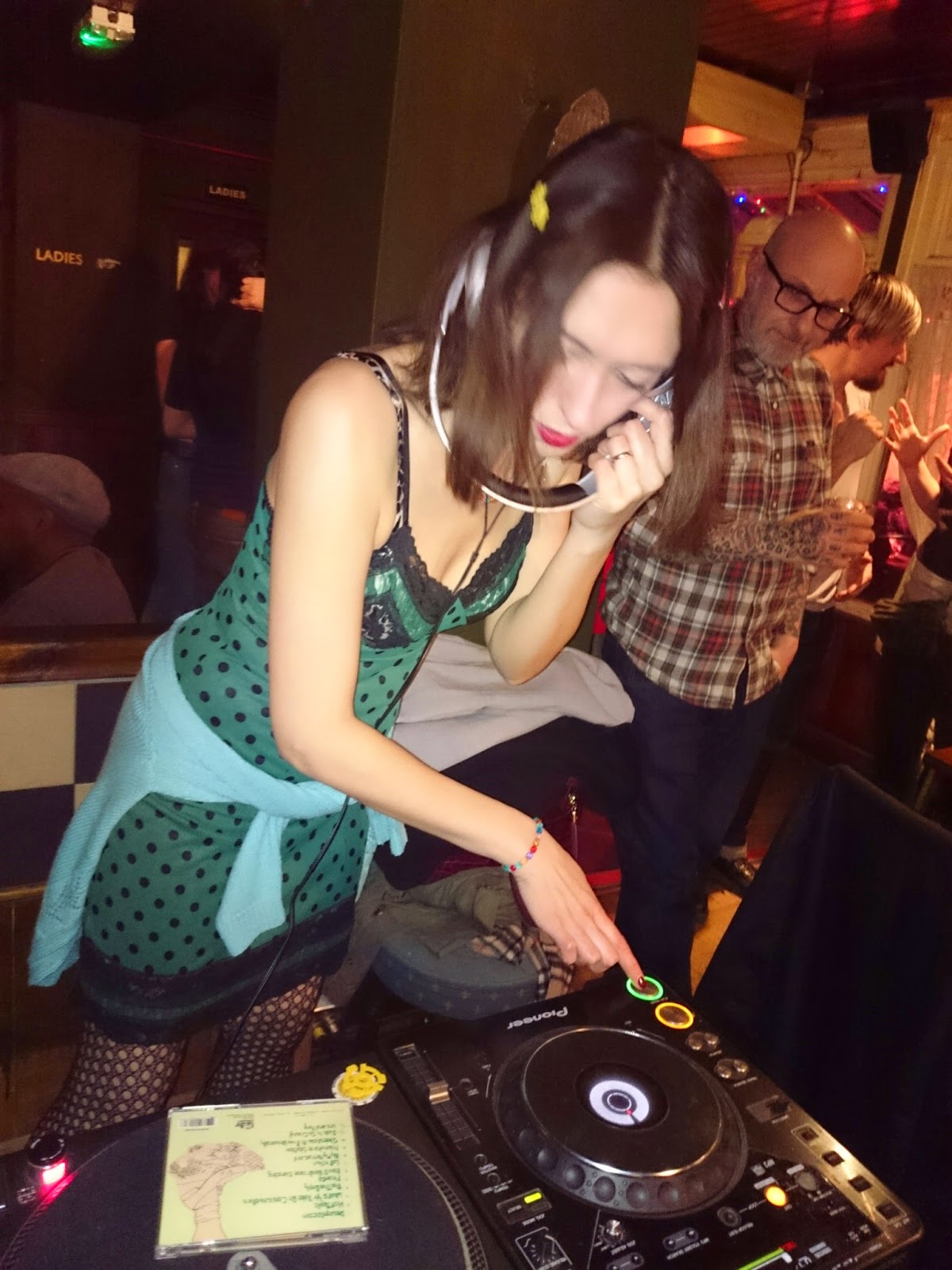 I really enjoyed rummaging in the loft for my old clothes from back then. I even found a hand knitted cardigan, in acrylic, (originally from a charity shop, in the days before I could knit). 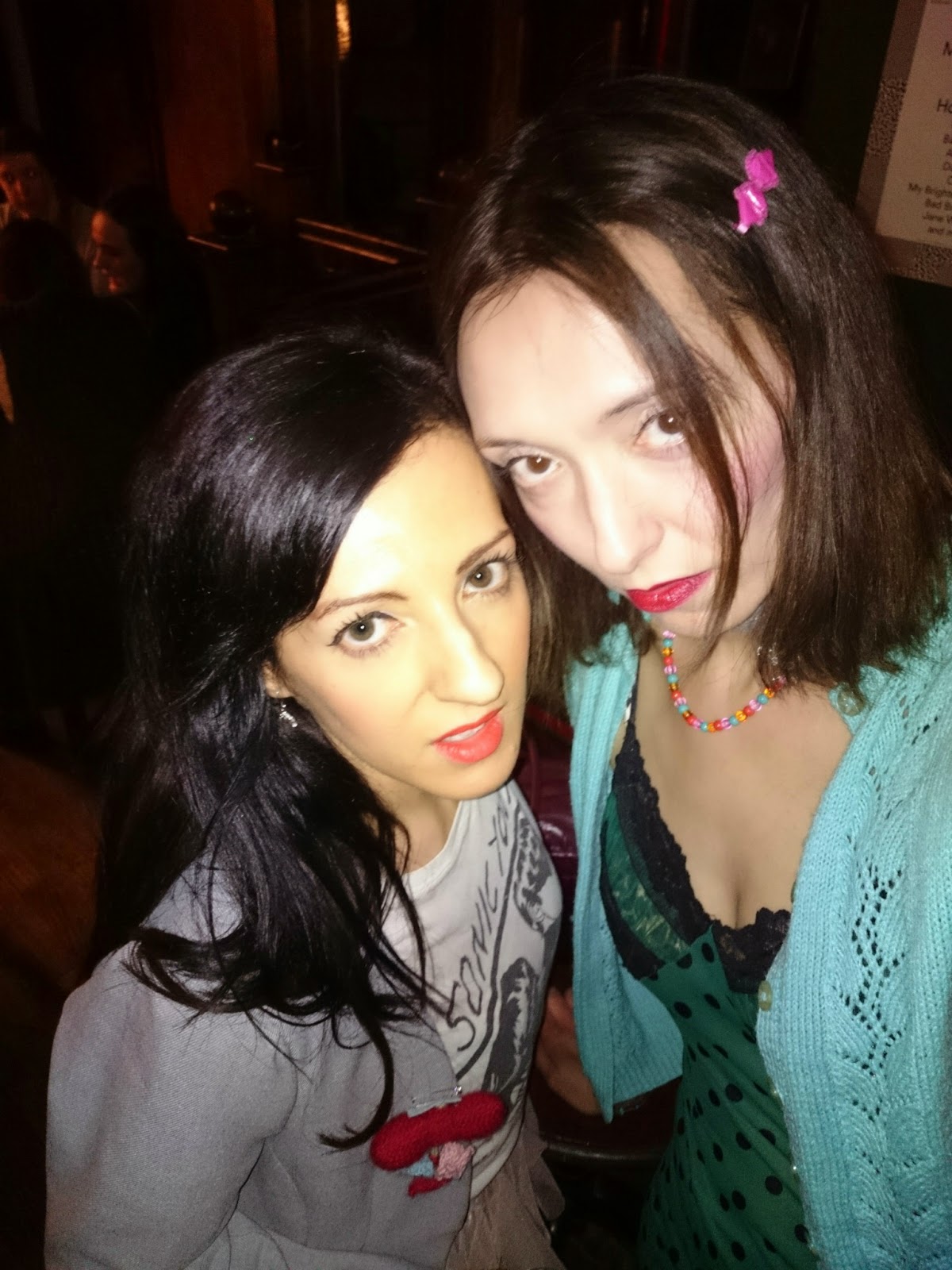 You can just about see it here, with lace panels down the front. I'm with my good pal Nese, we grew up near each other in Norf' London. Nese is convinced she, (and I), invented the selfie, in 1992, before it even had a name. But Shanthi has confirmed that it was in fact Madonna, back in '85. And of course with that Polaroid in Desperately Seeking Susan. These are the issues that matter to us. 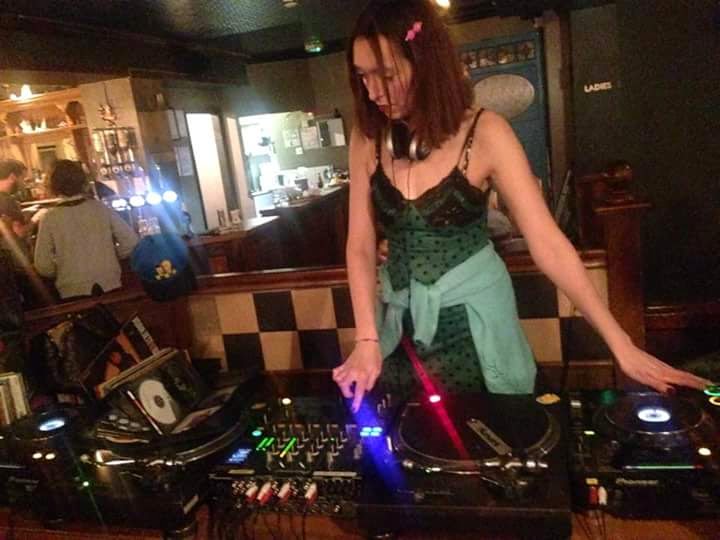 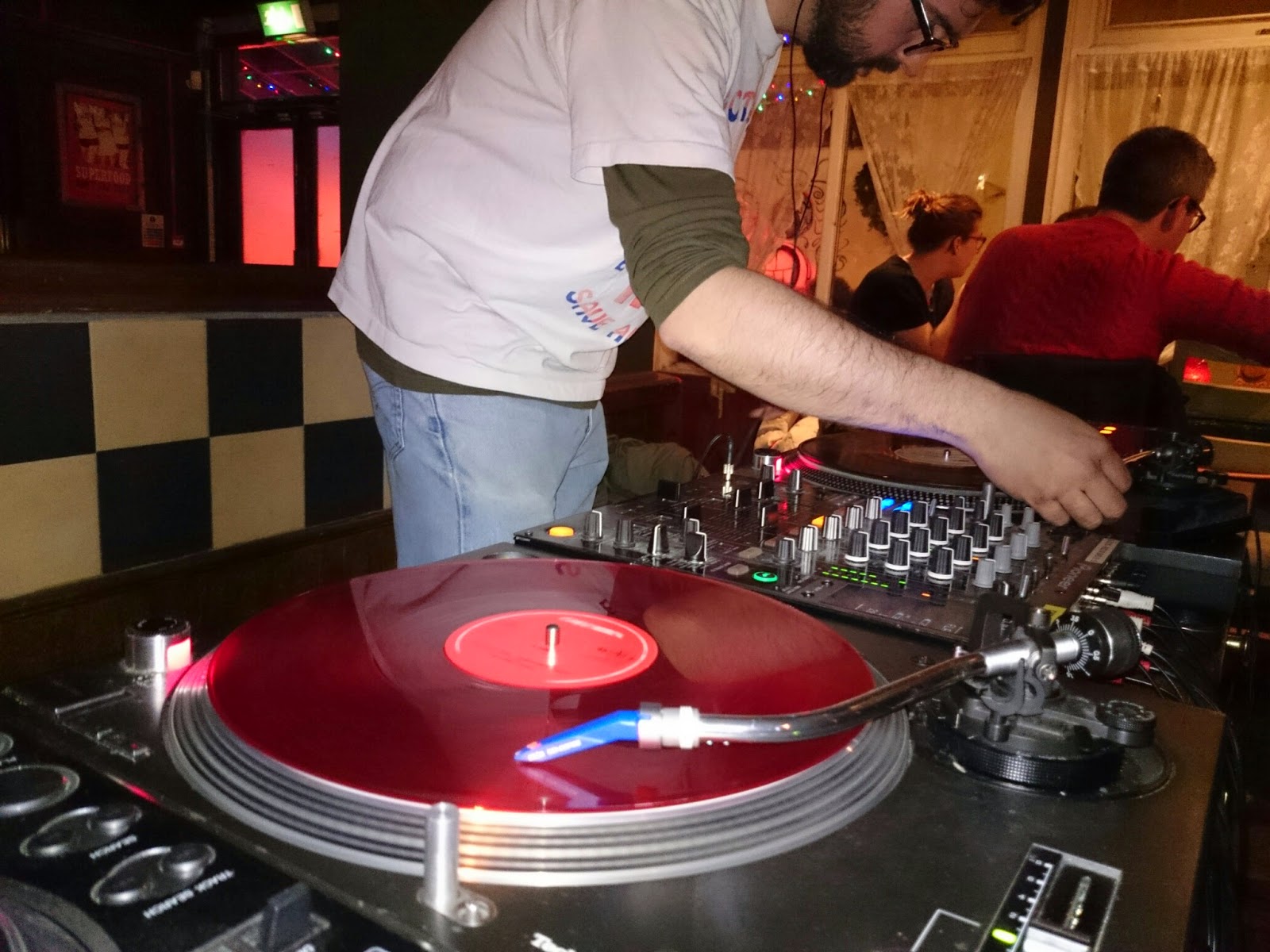