VE Day and My Victory Jumper

I finished it just in time, yesterday in fact. Frantically sewing up, voting and baking brownies with my boy, who was off school. He also took these photos. He is five. 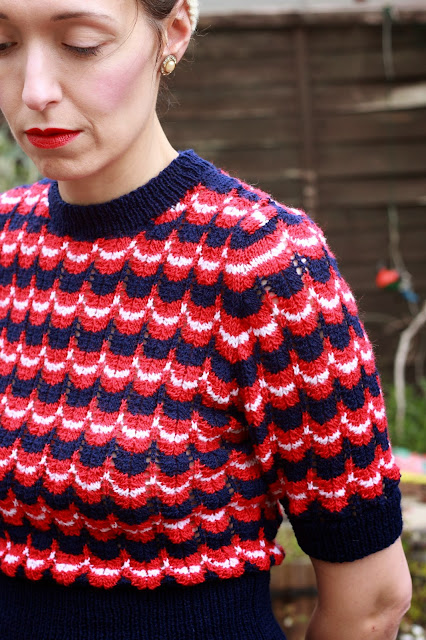 Your Victory Jumper, a now famous pattern, put out by the Victoria & Albert museum, and available on their website. On Ravelry, there are over 100 versions of this jumper. It was actually released by Home Notes magazine in June of 1945, so you wouldn't have been able to wear it on VE day. But I can. And I'm very proud to. 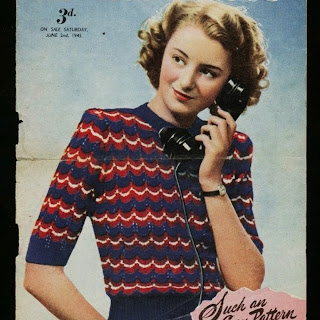 I used a vintage 3 ply wool in navy, Beehive Purple Heather. The red was a Cygnet 4 ply, but it is actually closer to a 3 ply in thickness. The white was a 4 ply, pure wool. I was amazed at how far the vintage wool went, only using the 3 balls the pattern called for. Two balls of Cygnet 4 ply, and one ball of white. 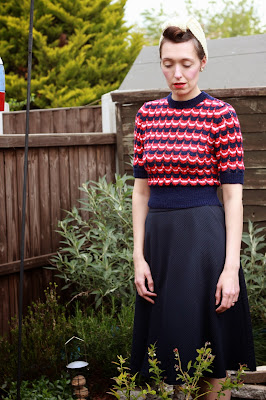 I followed the pattern, but was worried it might come out slightly too wide. I kept measuring as I was increasing on the body, and it was coming out at 18 ins. I stopped increasing at 128 sts, but I needn't have bothered as when I came to pressing it, I blocked very lightly, to keep it narrow. It can be pressed wider if need be though, easily accommodating a 36 inch bust. It is shorter than the original, but I like it sitting high on the waist, rather than blousing over. I think I will knit some shoulder pads to square off the shoulders a bit. 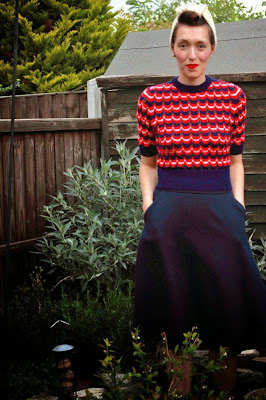 I'm wearing a turban from The Vintage Pattern Files. It is a 1940s pattern, and inspired my own version, the Herringbone Lace Turban. This one I worked in aran/worsted weight wool, instead of the 3 ply stated in the original pattern. I'm also wearing my socks and slippers, which are just out of shot! And while I'm at it, the skirt is from Sainsburys. That's how I shop vintage these days. 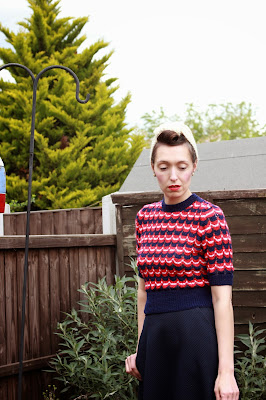 My son was very interested in the VE Day parties that I told him about, and I showed him some of the black and white (and colour), footage of children packed around the tables, stuffing their little faces. He couldn't understand that there were no treats to be had, no chocolate, and NO bananas, for over five years. To be honest, I can hardly picture it. I've been thinking about it recently, just trying to imagine how ordinary women would have coped. Especially if they had families. Could I have sent my two away from London? To strangers? A few of our clients at the salon have told me their stories of that time, being about the age my children are now. One of the ladies' mothers' wouldn't send her or her brother away, but kept them in Hendon, running from air raids day and night. Another stayed with her mother just out of London, in Herfordshire, where they had WAAFs billeted with them. They weren't out of danger, though. She remembers many daytime raids while at school, which luckily had a shelter in the basement. I think a lot of children would've quite enjoyed missing a bit of school. I know this little chap below would! 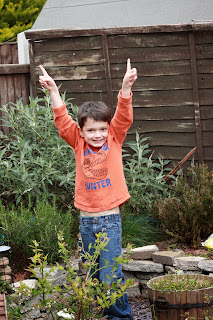 The little photographer in the making

I missed a post last week, which was when I would have celebrated a year of consistent blogging, but one of our dear puss cats had to be put down. It was a very sad week. I'll catch up with all that next week, along with some pics of me and Simone at the International Club - the knitwear edition.

I'll leave you with one of my favourite tunes from the end of the war, and a image from one of those VE day parties. 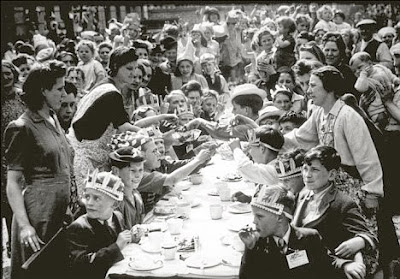 I'm Going To Get Lit Up (When The Lights Go On In London) by Carroll Gibbons & His Orchestra.